Books that explore language, grammar and writing are my guilty pleasure. I consider the injunctions presented as I am absorbed by the text, trying to figure out if the writers are following their own instructions. I also hope that I will learning something from them I can use in my own efforts.

It has also become clear that the circle of writers who produce these books know each other (or at least each other’s efforts) and constitute a genteelly competitive lot. There are nods to one another and the occasional dig. Language and usage evolve—some writers are more conservative, others more comfortable with change.

Some writers too, are more prescriptive (specifying what is correct and incorrect in terms of usage) and others more descriptive (more focused on the meaning expressed in a sentence). The former emphasizes the parts of speech and the rules that apply to them. The latter starts with the communication intended and determines the syntax that best gets the job done. 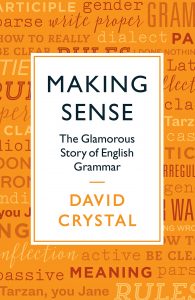 David Crystal makes his partisanship clear in the title: Making Sense: The Glamorous Story of English Grammar (Oxford University Press, 2017). He believes in the teaching and discussion of grammar, just not for its own sake. His fascination with the discipline is evident from the start as he provides, between preface and introduction, a brief demonstration of the etymological twinship of “grammar” and “glamour/glamor”: “secret knowledge” becomes “charm, attractiveness, physical allure.”

Crystal’s approach follows the cognitive development of his daughter Suzie and how her grammar develops from sentences of a single verb or noun when she is about eighteen months old to more precise and subtle locutions when she is three or four or five years old. In doing so he demonstrates how grammar transforms ambiguity into clarity.

In doing so he also presents the problem of applying Latin rules, the rules associated with a morphological grammar in which word endings and spellings (inflections) demonstrate relationships and convey meanings, to a language that is obdurately uninflected. As he points out,

We’re still trying to get rid of the pernicious influence of Latin on the way we think about English grammar. Several of the worries people have about ‘correct’ usage are the consequences of being conditioned to think about English as if it were Latin. (p.32)

The further I read, the more I realized that I myself am something of a prescriptivist and that when I correct essays in my art-history classes I provide explanations that are more focused on the “correctness” of the usage than the reasons why the errors students make obscure and subvert their intended meaning. I have a lot of Asian students already struggling with working in a language as different as English is from Chinese or Korean. I also have a great many learning-disabled students or just ill-educated students whose ability to write coherent English is limited.

Hmmm. That definitely gives me something to think about.

Recognizing my failures in this way is only the first step to rectifying them. Unfortunately, as Crystal points out in the preface, pedagogical suggestions have been excised from this book. Those suggestions on grammar-teaching, focused as they were on the situation in the United Kingdom, “were felt by the publisher to be too parochial for an international readership.” (p. x) He has, however, made them available on his website, so I plan to take a look.

Where does this book fit on the shelves dedicated to the English language and writing? Not sure but the space is there.