For a book that has a signal presence within the critique of the Donald Trump presidency, Fire and Fury: Inside the Trump White House by Michael Wolff (Henry Holt and Company, 2018) is an abysmal piece of writing. 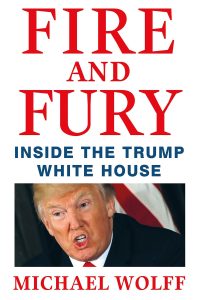 I watched a few televised interviews and found the author arrogant and obnoxious, not a personality that inspires one to run out and get the book. Still, I bought it and read it—and as I anticipated the reading was not much fun.

Many have already pointed out that the book is riddled with simple errors that a halfway competent fact-checker could have fixed. Others have noted that the text is filled with typos, and it certainly is. Sentence and chapter structure are weak and unwieldly. Word choice is dubious. In fact, the book resembles in style and quality the first draft of a research paper I might receive from one of my less able college students.

The narrator is utterly unreliable, a problem in a work that purports to be “journalism.”

In the Author’s Note, Wolff brags, “Many of the accounts of what has happened in the Trump White House are in conflict with one another; many, in Trumpian fashion, are baldly untrue. Those conflicts, and that looseness with the truth, if not with reality itself, are an elemental thread of the book. Sometimes I have let the players offer their versions, in turn allowing the reader to judge them. In other instances I have, through a consistency in accounts and through sources I have come to trust, settled on a version of events I believe to be true.”

As a result, every word wobbles at the edge of the factual and readers have nothing, in the absence of cited sources, that might help sort through it all. Wolff also—with great glee—lards his account with editorial asides about the speakers, their motivation, character, relationships. No cheap shot is left unfired.

Wolff had intended to recount the first hundred days of the Trump administration. Trump’s tweets, the quickly revolving door of his administration, scandals and his circle of friends, frenemies and family provided more material than even that experienced gossipmonger could have anticipated. Then there’s the matter of the investigation into Russia’s meddling with the 2016 election, James Comey, Robert Mueller and the story that in all likelihood has only begun to unfold.

In the end, despite the dirt, Fire and Fury was a damned tedious read.

I loathe Trump. I have deep fears about the damage he and his minions have already wrought on this country, its land and water, its Constitution and government, its economy and society. I am horrified by the number of Republican members of Congress, whom I know at least once were people of common sense and honor, who have drunk Trump’s racist, xenophobic, me-first Kool-Aid. I go to bed worried about what harm Trump will inflict as I sleep, and I wake wondering what he did while I was out. I wish this book were the kind of book that could persuade, through logical argument and well-documented research, Trump’s supporters that they need to come over to the side of decency and good as quickly as possible.

It doesn’t do that.

Yet while this book is a disordered heap, it seems to add evidence that my anxieties are justified.