My Dear One had read Parallel Play: Growing Up With Undiagnosed Aspergers by Tim Page (Random House, 2009) and handed it off to me a few weeks ago. I recognized the title and author. I remembered listening to an interview with him on NPR and had thought then what a fascinating and likable guy he seemed to be. I already had some familiarity with him as a music critic, although I was unaware that he had been awarded the Pulitzer in 1997. It was surprising to note that the copyright date on Parallel Play was 2009, though. Surely I had listened to that interview only in the last year or two?

That interview, as it happens, did take place in the last year or two. It focused, however, on a traumatic brain injury, an acute subdural hematoma Page experienced in 2015.

My Dear One gave me the book in large part because autism is a fact of life for a young couple I know. They have two sons and the older was diagnosed autistic by the time he was about three. It has been a mighty struggle for them. This spring they spearheaded a massive fundraising effort, bringing together friends far and wide through social media, and collected $8,000 for Autism Speaks organization.

Tim Page has been through a lot. 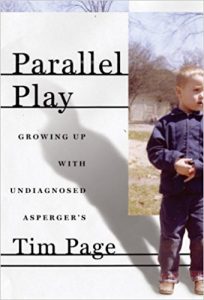 Page’s memoir is not precisely a story of his life as an “Aspy.” He did not learn that the constellation of tics, issues, anxieties and peculiarities that ran and occasionally derailed his life had a name until he was forty-five. He recognizes that his extraordinary success as a music critic and writer is in part thanks to the syndrome, neither strictly because of it, nor despite it.

Memories of his teens and twenties form, for me, the most compelling section. All of us committed stupid kid tricks and stressed, frayed or broke parental bonds. Most of us profoundly regret at least a few acts and attitudes from our youth. Many of us also lost cherished friends to bad choices made—and mourn those friends to this day. Learning how Page was able to understand his past within the context of Aspergers offered me insights into how I might read, reevaluate or rue my own actions. It seems that the self-knowledge Page gained through his diagnosis has blessed him with a tranquility about his present and future.

Autism and the Internet

A reader sent this link to a site with an excellent article: Internet Safety Guide for People With Autism Spectrum Disorder. Good Reading