The skies wept over Ypres and Passchendaele.

This was the place that my Dear One felt most drawn to. On the drive up, he read me key passages from Leon Wolff’s In Flanders Fields. I had spent little time studying that corner of the Front. I had read The Danger Tree and The First Day on the Somme. My familiarity with this area is not what it should be. We watched the landscape get flatter and flatter; we thought about the idea of a “ridge” or “high ground” and pondered the nature of a landscape recently taken from the sea.

Historians speak of rain, the water that collected on the impermeable clay substrate, the rain that seemed to fall at the command of the Germans. There are the horror stories of soldiers and horses sinking into this sucking soup and disappearing. Forever. For the most part, battles gained little–and only briefly–and cost much. If there is a paradigm of the mired (in)action of the Western Front, the salient around Ypres surely was it.

Clouds gathered as we approached the Menin Gate in the center of town. Rain fell lightly.

View of Ieper from the Menin Gate

Modern Ypres is a fantasy. The city was flattened, eradicated. What one sees now, from cathedral to administrative centers and shops are resurrections of the dead.

The Flemish façades, charming details, none of this is original. It is all an effort—perhaps a worthy effort—to remember exactly what it was we all went to war for. When we speak of the “cause of civilization” was this what we had in mind?

We headed out of the salient into Passchendaele. This was the farthest point reached by the Allies in the third and final battle of Ypres, in 1917.

Tyne Cot is the largest British military cemetery in the world. A flint wall protects the graves. Names of soldiers for whom remains could not be found are engraved on the walls. In the visitors’ center, modest displays allude to the horror of this place. A young woman’s voice names the dead, one by one, as a photograph matches a face to the name: so many carefree boys, so many serious young men, so many futures cut short. 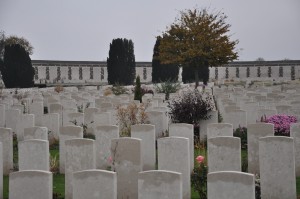 a small corner of Tyne Cot

A Soldier of the Great War, Lancashire Fusiliers

Even at the beginning of November, the cemetery is full of flowers: pink flowers, yellow chrysanthemums, ornamental grasses. This field of the dead blooms like an English garden. Small balsa crosses carrying paper poppies, notes encased in plastic, mementoes, are here and there. Even now, ninety-three years after the end of the carnage, survivors remember and grieve. Memory becomes a legacy and the legacy must be nurtured to be preserved.

gifts of love and remembrance

If there is something that the acreage of marble crosses has impressed on me, it is that the story of the Great War is not general, it is specific. The dead are not anonymous millions; they are individuals. Rosters chiseled on modest stones in rural hamlets and on the vast walls of Douaumont, Thiepval, Tyne Cot, Vimy and St. Mihiel insist on the person even when there was nothing left of the person to place under a tablet. We say we do not want to forget, and these names are the catechism we recite.

We have reenacted this ritual for the disappeared of the concentration camps, the soldiers who served in Viet Nam, the innocents lost in Oklahoma City, at the Twin Towers, the Pentagon and Shanksville. We are determined to remember the dead and so to honor them. Would, however, that we could construct a future where such memorials did not need to be built.

As we moved toward the portal out of the cemetery, I saw a streak of light near the horizon, evidence of the sun before it sank into obscurity. We returned to the car and headed toward home as the rain resumed its rhythm.