“They Started It!”: Facts, Truth and Blame 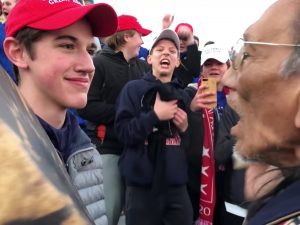 When I saw that video clip of Nick Sandmann smirking at Omaha Elder Nathan Phillips who was drumming and chanting, and realized just how close the two were standing, I was outraged at the boy’s insolence, shocked at the implicit insult of a white person to an Indigenous person. Later as more videos were posted, after a couple interviews with Mr. Phillips and one with young Sandman, having read through a ranged of comments from all sides of the controversy, I have come to a single defining question.

Where were the chaperones?

I have had to do some research. Covington Catholic High School has taken down their website so there is no information I could glean from that. Here are the facts such as I have come to understand them:

Who started it all? We don’t know and we are unlikely ever to know. What is clear, however, is that the adults best positioned to deescalate the emotional heat and fear of this encounter were missing in action and the children were running the show–and making a mess of it.