At 60 you’re just getting started?

The morning of January 28 dawned bright and mild. At 11:00, doors would open to the party we had planned for ourselves to celebrate my 60th, my Dear One’s 78th, the 2nd anniversary of our marriage and my Tattooed Boy’s 30th, and all of which fall with a month’s span, give or take a couple of days.

Breakfast rituals, however, are set, regardless of upcoming events. I sipped coffee, read the newspapers, and kept half an ear on the background noise of the Today Show. An intro to a lifestyle piece caught my attention: someone was intoning, “At sixty you’re just getting started…”

I understand that the Today Show is fixated on their 60th year of broadcasting and keep looking for ways to remind viewers of their venerable status, but did they have to choose this particular day for this particular feature?

A host of fabulous sixty-somethings was quickly offered up: designer Vera Wang, singer Tina Turner, and a list of actors including Jane Fonda, Kirstie Alley, Meryl Streep, Susan Sarandon, and Dame Helen Mirren. What I learned was that beauty, an energetic sex life, and a trim athletic figure are all within my reach because, hey, sixty, while it may not be the new twenty, is only a number.

Oh, for goodness sakes! Of course it’s only a number—a darned big one.

I turned sixty on January 5, 2012, and every bit of those decades’ wear-and-tear hovers somewhere between the remote edges of my consciousness and the forefront of my awareness as I write this. I have two pairs of glasses, one for general use and one for my desk-and-computer activities, but threading a needle and doing the crossword puzzle require that I cast off the specs and bring the whatever-it-is up to the general vicinity of my nose so I can see what I am doing. My bursitic hips throb at night and I spend nearly five dollars for the capsule of Celebrex© I take daily to keep my arthritis quiet. I have costly prescription orthotics for the practical shoes I wear to soothe my aching feet. High fashion at this address is a matter of practicality rather than pizzazz.

And the role models provided? Puh-leeze.

Vera Wang? The woman was blessed with a wraithlike build shared by probably one-tenth of one percent of all humans carrying a double-X chromosome. I could no more achieve her body now than I could at ten or twenty or thirty and I’d like to b*****-slap the writer who thought throwing her in my face was something other than offensive. All of those celebrities possess incomes that allow them personal trainers who can put them through their paces in the privacy of their homes and cooks that provide meals that are nutritious, calorie-restricted and portion controlled. The zaftig Kirstie Alley at least gets to make money off of getting fat then losing weight. Meryl Streep and Dame Helen are Goddesses, but they have economic advantages that allow them elegant wardrobes tailored to perfection. I’m not saying I’d look as good as they do in their clothes—I’m just saying I’d look better than I do if I could wear beautiful clothes in gorgeous fabrics that actually fit.

So no, I don’t think that at sixty I’m “just getting started,” and if my mind was fired up by that fantasy, my body would quickly douse it with the icewater of reality.

As Scarecrow said, "Of course, some people do go both ways."

Besides, I don’t want to get started; I want to sit back and think about all that has gone before.

I want to remember as much as I can of the trivial details and mundane facts of my life. I want to appreciate my accomplishments, calmly recognize my failures and quietly atone for my sins. Most of all I want to wallow in the affection of friends old and new.

I was relieved when no one arrived promptly at 11:00. I really wasn’t ready. By noon, however, a steady stream of guests arrived at the door. Lynn jetted in from Cleveland and Cousin David drove from Cape Cod, detouring to Washington DC to collect his daughter Helen. My Dear One’s children and grandchildren traveled from Pennsylvania. Friends arrived from next door, across town, across the county and across the state. It was a mob of the most interesting wonderful people talking and laughing and eating, and bringing me flowers. 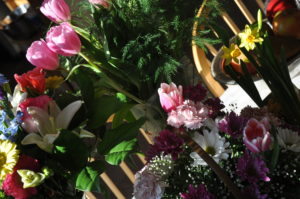 So many flowers. Marcia-Gayle said she wanted to bring posies that felt like spring. All those lilies and poppies and tulips and carnations and mums and tiny golden daffodils were full of the springtime that happens even as one turns sixty.

At sixty, no one is just getting started. At sixty, however, I am just starting to understand this new season of my life.