San Francisco 1: I Begin at the End

It is now 10:51 A.M. Pacific time on 15 May 2019 and I am using a program called “Notes” which is definitely not Word and it is horrible. I can’t get into Office, it seems, because the contract is now attached to my website and therefore requires an internet connection. I opened a page in Word but no letters appear when I fidget my fingers across the keyboard. Bummer. So much for imagining that I can rough out a couple or three blog posts while we are waiting for this show to get on the road.

Here at gate 57 at San Francisco International Airport we are seeking calm and passing the time. American Air flight 651 was scheduled to depart at 11:04 A.M. as of 7:04 this morning when they sent confirmation. The local news at about the same time warned that arrivals were experiencing delays averaging three hours. I check the flight again. Still on time.

I had counted backwards from 11:04 to determine that we needed to get in the Uber at grandson Miles’ house at 9:00 so we needed to leave the hotel with Miles’ car by 8:30 and as we wanted to top up the tank, another brief stop, we really needed to check out by 8:00 to be on the safe side. I had texted that sequence to Miles and it worked for him. As I had done nearly all the packing the night before and risen at 6:00 to perform my own ablutions, we were ready to go even earlier. 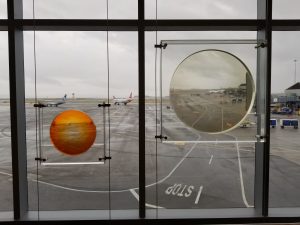 While getting gas–by then it was 8:09–the email announcing a 90-minute delay came in. Oh well. Now we had all the time in the world. When we had checked the suitcase through it was 8:28, another email informed us that departure time had been moved to 3:15 P.M. Yikes. Oh well. We went through security which couldn’t seem to deal with my Dear One’s bionic shoulder and headed to gate 45A. Found ourselves some comfy seats and got another email. The time was 9:24. Our gate had been changed to 57, so we ambled back to security and redirected ourselves into Terminal 2. The upside of all that trekking was the chance to pay more attention to some of the art installed in terminals 1 and 2. Delighted to find a sculpture by Fred Eversley whom I knew way back in the ’80s when I was living in Long Beach, California.

There was an offer of a flight leaving at 12:30 P.M. with a two-hour stop in Phoenix, but it would arrive in Philly about 11:30 and this delayed flight, a nonstop, is supposed to get there at 11:56. Six of one, half dozen of everything else. The gate attendant making changes seemed to think we should just stay put. The specter of a mechanical difficulty that had been raised about our original aircraft was laid to rest. Fine. Best to wait here.

It is now 10:16 A.M. at SFO in a drizzly, cotton-wool fog. We have split a cheeseburger for breakfast as my Dear One finally suffered a pang of appetite after several days of food aversion. We have snagged a comfortable chair for him next to a workspace with electrical plugs for me. We read. We write. We drink and express silent appreciation to whatever developer decided that retail and alcohol in pretty much unlimited quantities were a good idea in airports. 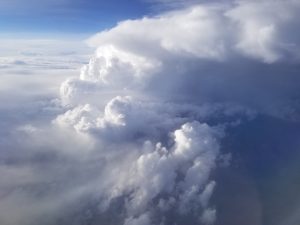 from light to dark

Somewhere around 3:00 P.M. a plane disgorges passengers and we are loaded on; half an hour later we are pulling away from the gate. Oh joy of joys, seat 7A has been left unoccupied so that I can move there from 7B, leaving the empty middle seat and its tray-table to use as we will.

It was May 16 before we collected our luggage. We arrived home around 2:00 A.M. EDT, so I figure that it was about seventeen hours, maybe eighteen, between leaving one bed and collapsing into the next. A long day.