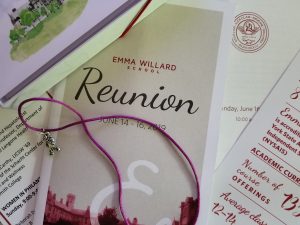 The Saturday of Reunion weekend marked fifty years to that June 14th when Emma Willard‘s class of 1969 gathered in the greensward triangulated by the Chapel, the new Library and Weaver Science Building. It was hot and humid—we had worried that early morning rains would force us inside—but they did not. Prior to our arrival, there had been intermittent fillips of anticipation about the event for months; the date had been secured in my calendar since 2018. A handful of us met in phone conference a few times to plan our pleasures. As we registered, we checked and rechecked the list to see who was certain to come and who might need some persuasion. The 50th Reunion is the Mount Everest of the Himalayan chain of quinquennial gatherings that kept us bound to that life we had shared—or endured—for a year or two, or three or four. As freshmen we number fifty-seven, not all of whom made it through, nor did some of the later arrivals collect a diploma. One hundred and three of us graduated. 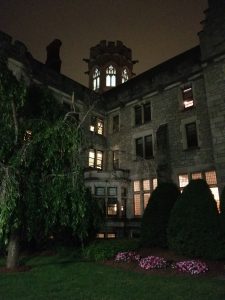 Much is made about that collegiate Gothic campus. It’s fine buildings–the first three opened in 1910–and handsome grounds have been featured in two Hollywood films, Scent of a Woman (1992) and The Emperor’s Club (2002). Gargoyles adorn the buildings and name the yearbook. Traditions have survived that long predated us while our eccentric dress-code has faded into memory. There is a sense that relationships forged there–as we misbehaved, yearned for more frequent interactions with boys, speculated about the presence of saltpeter in the pork chops generally served at coed social events, struggled with academics and feared the future—were the glue that kept us connected and the magnetic force that drew us back every five years.

I don’t think that is quite right.

I know for a fact that I did not find myself with some hundred-odd bosom friends whom I have cherished for the last half century. I can say that except for ten or twelve classmates including friends in prior and subsequent years, most of the women of 1969 were merely ciphers to me. I neither liked nor disliked them—I simply didn’t know them. The Venn diagram of my communities was not extensive and the groups it contained not numerous. 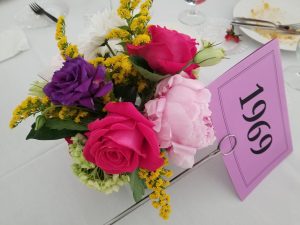 Overall, these reunions were less a matter of reconnecting than making new connections. Since 1979 there has been a kind of blossoming. Each time I came back I spoke directly and more intimately to at least one classmate I had not previously known well. Each time every classmate became more interesting to me, more desirable as a friend, more essential as a part of my history. The 50th was no exception; if anything it was an intensification of that. The way that Emma is part of me now was not a fait accompli by graduation; it is a process that has also guided me in my life apart from Emma.

And therein lies the mystery.

At the Alumnae Survey Results panel led by Steve Gang, data collected suggests that my experience as a student and as an alumna is more or less typical. The word clouds generated in response to various queries did not surprise me; that the word “connection” was the most prominent was what I might have expected. Gang went on to point out that the Emma results were atypical for secondary schools, starting with the high response rate and continuing with the careful articulation of the comments. There is much more that I and many of the other alumnae hope to learn about the survey results—yet I am not sure any analysis will solve that mystery: what about Emma is it—and what about the women of the class of 1969—has been so dynamic a gravitational force? 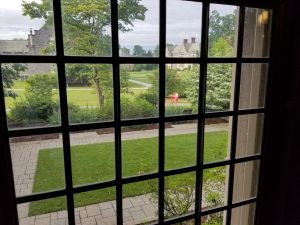 campus through a window

Beyond the campus, few of us occupied the same geography. Staying in touch was a matter of costly toll calls and dependence on the US Postal Service. I doubt that any of us returned to Mt. Ida with the intention of exchanging confidences with former classmates who were largely strangers. I don’t think we thought that we would end up loving each other so intensely.

Maybe it is a sort of weird chemistry, rather like an epoxy in which mixtures must be kept separate until the moment when they form that indissoluble bond. Maybe it is just us, the finest of MXMLXIX and that complicated decade of the Sixties.

Quotations from poetry, essays and popular music were scattered throughout our Gargoyle. In leafing through it, I found words penned by Noel Paul Stookey that came not from a song but from the liner notes of the Peter, Paul and Mary album Late Again from 1968.

There is a bit more to the quotation.

And for a moment, light as air,
We knew what we were holding
And smiled the way we used to want to then.

Maybe the answer is that we now know, thanks to Emma, thanks to our families, friends, selves and the serendipity of life, we know something of what we were and are holding, and we are able to smile the way we used to want to then. 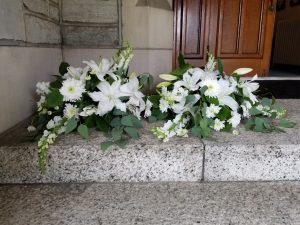 after Chapel and the end of all that