Hey, DNC! In This Case, Less Just Might Be More

As we approach the second Democratic debate, the herd is just too large. Even this early on. Few of the runners stand out in that cloud of dust. Those watching the race are learning anything meaningful about those stuck in the pack. Those that really don’t stand a chance are turning the race into a stampede and those with the most realistic shot at the White House are becoming collateral damage.

I’ll give them all the benefit of the doubt and stipulate to their patriotism and good character. I am sure they are appalled by Trump and his Cult in the GOP. But are they really following a path that makes them effective in tossing the Elephant from the Oval Office? 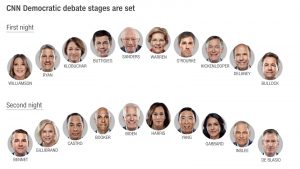 Just because a citizen has pockets deeper than the Bermuda Triangle, it doesn’t mean they should be spending that money on stroking their own egos. That’s a Trump thing. Yeah, Tom Steyer, I am talking to you.

Will a picture help? What matters now is name recognition, audible cheerleading from potential voters and the potential for fundraising success.

Give or take, the top five fundraisers during the second quarter—although these things change quickly—are Buttigieg, Biden, Warren, Sanders and Harris in that order. (These and the following facts, unless otherwise noted, are courtesy of The New York Times.)

Fundraising is closely linked to voter confidence. So let’s compare money and current popularity. The fact is, nobody wins the presidency without adequate funding. That includes @realDonaldTrump who benefited equally from Russian trolls and the wads of dark money that flowed in from the avatars of greed and ruthless ambition.

A YouGov poll done from July 14 to 16 ranks the leading candidates:

What if we set the bar, for this debate at least, a little higher? What if we were to require a minimum of 1% support in the polls and a minimum of $1.5 million raised from individuals at most recent accounting? Who would that leave?

And what if the next debate required 5% support in the polls and $5 million in individual contributions?

Fourteen candidates. With only seven speaking at a time some morsel of information might actually emerge from the clamor. 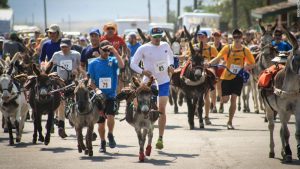 running of the burros

Fourteen is still too many but providing more debate time to fewer people would do inestimable service to Democrats, Independents and Never-Trumpers hoping to find three, no more than four horses to place, show and, they hope, win.

Remember. It’s all about of Asinus Triumphantes in November 2020.