WWI: The Roads Less Traveled By

Lutyen’s monument to the Missing of the Somme at Thiepval

Serena our GPS seems to have an affection for countryside and tiny rural lanes. When departing Nancy, for instance, we found ourselves turning abruptly off what seemed like a sensible main road, twisting through a tiny village and up a steep track through a forest of golden light and falling leaves. We emerged at the summit at a sign that announced our arrival in Gorze. Such an evocative place-name!

We, left to do our planning with a paper map, would choose heavier lines to follow; Serena sees the terrain from that extraterrestrial perspective; her sense of direct is “as the crow flies” and it is mostly for us a flight of delight.

Landscape with Cows and Church

Having visited the memorials at Beaumont-Hamel and Thiepval, we turned out sights on the little town of Albert. We were not entirely sure what was there, a nice church we thought, a little Musée des Abris. At any rate, it was en route to Amiens, whose majestic Gothic cathedral was our ultimate destination.

Not long after our departure from Thiepval, Serena instructed us to turn left.  “Left”? That byway is surely private property, a rutted path for pedestrians not motorists, and besides, the man hiking there is using up all the space. After a moment’s hesitation, we agreed that Serena was rarely misguided and always had our best interests at heart. We eased past the man and slowly and carefully rolled through ruts and mud puddles. Good for research, we agreed. This must have been the kind of road Pop and David knew in 1917-1918. Imagine trying to transport the wounded over such surfaces in Model-T Fords? It would have been physical torture for the soldiers as they were bounced and joggled about and mental torture for the drivers who were trapped between urgency and solicitude.

a flint in hand

The track ran longitudinally across a slope. To our left was a low bank and above it a field; to our right, tilled earth sloped downward to a stream beyond which we could see the bluish forms of the town. The fields were strewn with flints armored with chalk.

The effect was eerie, rather like some ancient battleground with bits of bone, eroded and bleached by time, all that remained of fallen warriors.

We found a marker, more of a small shrine ornamented with potted plants:

the place of discovery

Someone dug a sculpture out the ground here at some point between 1000 and 1099? Was it a Madonna or rather some Roman deity?

the steeple of Notre Dame

A couple hundred meters or so further on, the pavement reappeared and we were determined to find this medieval relic. We arrived at the Cathedral of Notre-Dame de Brebières, which was conveniently located immediately adjacent to the Musée des Abris, which was closed. The Cathedral is a mosaic-encrusted, Romanesque Revival structure a little garish but appealing.

We moved down the chapels on the right, circling the altar and finding Herself surrounded by gilt and stone and more mosaic. She was no classical matron or goddess but a Virgin once brightly polychromed and now worn with time. She is really lovely, a real and genuine Mother and not some idealized vision of the Mother of God. 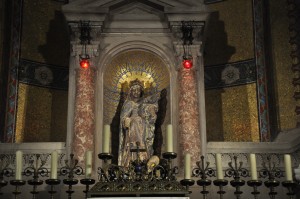 Around the corner a hand-lettered sign, thoughtfully translated into several languages, provided the details of Herstory: 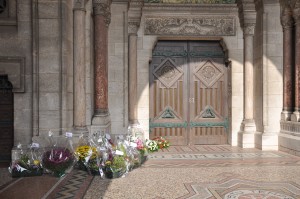 flowers on the doorstep

A florist emptied his van of chrysanthemums, lilies, flowers of every kind and color, onto the basilica steps as we left. It was, of course, All Hallows Eve and the sanctuary would look beautiful for the services on All Saints Day.

Saint Espace, our patron saint of parking, arrived late in Amiens, but finally a space appeared. We bought an hour and forty minutes indulgence from the meter and headed toward the cathedral. 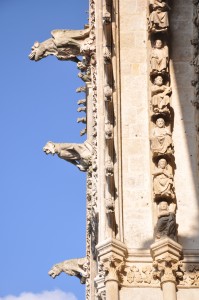 Late afternoon sun brightened the façade and set the gargoyles in high relief against the blue sky.  The soaring spaces of the interior are simply jaw-dropping. It isn’t as thought I didn’t know about the building’s famed qualities—it’s just that the physical experience igravesite of the family Lorensot-Visat, 2011s something else. We did not have a great deal of time and we were tired. We excused ourselves from this vibrant and very chic city and headed home to our little village in the Artois.

As we neared Hauteville and home, Serena took us down an unfamiliar road barely more than one car wide. Days are short in this part of France as October turns to November as we are surprisingly far north. Our local address is just over 50 degrees latitude and our street in Aberdeen, Maryland, climbs only to 39 degrees. Heck, St. John’s, Newfoundland, only makes it to 47 degrees. Sunrise comes after seven-thirty and sunset doesn’t make it to five-thirty. Shadows stretched away from roadside poplars, bending with the curves of the fields. 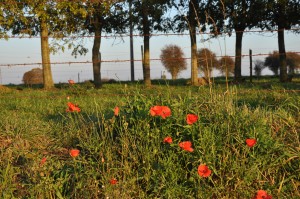 poppies by the roadside

A patch of scarlet demanded my attention. Poppies grow alongside roads, in patches here and there, are ow the symbol of Flanders and the inescapable emblem of the Great War. We wear each day the paper poppies given us at Vimy Ridge. I remember the poem, perhaps overused but I think powerful in its plainness. Canadian Lieutenant Colonel John McCrae is said to have written this rondo on 3 May 1915 the day after he saw his friend, twenty-two-year-old Lieutenant Alexis Helmer, die in battle. It was published in Punch in December 1915 and its words seemed known to all. November 1 is the moment of the liturgical calendar dedicated to remembrance of the dead. I never forget that this week we are in Flanders fields. 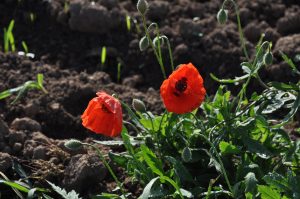