The Real Problem With Donald Trump

It’s all about him.

We were preparing supper, I think, when my Dear One said, a propos of nothing, “You know what the problem is with Trump?”

“No,” I answered, “What is the problem with Trump?” I held back the thought that essentially nothing is right with Trump. 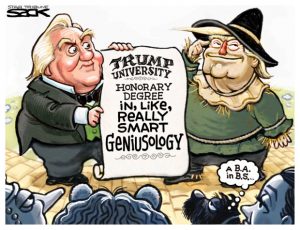 No matter the subject his native intelligence means that he knows more, and especially his gut knows more, than professionals in his administration. Those professionals would include military leaders, science advisors, economists, and anyone with deep and broad experience in government and administration. When they disagree with him, which sooner or later every person of minimal competence does, he fires them. Every subsequent hire is less informed about the job he or she is supposed to do and more dedicated to the coddling and protection of Trump over whatever it is he or she is supposed to do.

Trump’s fixation on the measurement of his intelligence goes way, way back. A brief surf of the Internet turned up the following.

In January 2004, in an interview with Matt Lauer on The Today Show about a new NBC reality program called “The Apprentice,” Trump bragged of his unparalleled intelligence. A few years later, April 1, 2011, he remarked to Piers Morgan on CNN, “I always told people, you know I’m a very smart guy. I got good marks. I was all this, I went to the best college…”  In 2013, he returned to his high I.Q. score when demonstrating the superiority of “The Apprentice” over “Shark Tank” and himself over Mark Cuban.

Trump amplified the scale and frequency of such comments in 2016  when he began his presidential campaign. 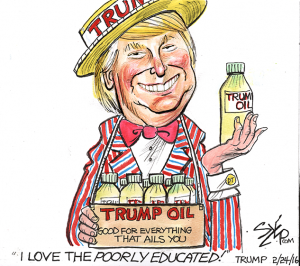 March 16, 2016 on “Morning Joe” on MSNBC, on educating himself on issues related to foreign affairs: “I’m speaking with myself, number one, because I have a very good brain… I know what I’m doing and I listen to a lot of people, I talk to a lot of people and at the appropriate time I’ll tell you who the people are… My primary consultant is myself, and I have, you know, I have a good instinct for this stuff…”

April 26, 2016, having won several primaries, Trump spoke at an event in Trump Tower: “I’m not changing. I went to the best schools, I’m, like, a very smart person. I’m going to represent our country with dignity and very well. I don’t want to change my personality — it got me here.”

September 27, 2016 at the first presidential debate, the question of the candidates’ taxes came up. Trump, of course, as of this writing in August 2019 has still not released his tax records. When Hillary Clinton suggested that Trump was keeping his returns secret because he wanted to obscure the fact “he’s paid nothing in federal taxes,” his answer would have made Leona Helmsley proud. “That makes me smart,” he said. 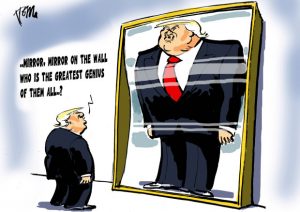 December 22, 2016, as president-elect, Trump declined the daily intelligence briefings customarily provided to the incoming chief executive. Apparently he didn’t need them, he told Fox News: “I’m like a smart person. I don’t have to be told the same thing in the same words every single day.”

As president, Trump felt he had even more to crow about—or at least more important audiences who would have to listen and presumably applaud his pronouncements. On January 21, 2017, about twenty-four hours after being sworn in, he went to CIA headquarters to make a speech, in front of the Memorial Wall where agents who died in the line of service are honored. Trump spoke on a range of topics, prominently his intellect and the intelligence of his ancestors. He said, “Now, I know a lot about West Point. I’m a person that very strongly believes in academics. In fact, every time I say I had an uncle who was a great professor at MIT for 35 years who did a fantastic job in so many different ways, academically — was an academic genius — and then they say, ‘Is Donald Trump an intellectual?’ Trust me, I’m, like, a smart person.”

Then the time that Trump’s historians may well describe as “The Troubles” got underway. FBI Director James Comey opened an investigation into Russian interference in the 2016 election, was fired, and the investigation was taken over by Special Counsel Robert Mueller. A revolving door to various jobs in the Trump administration spun wildly. Books analyzing the interactions within the White House appeared. Some were better documented than others. Several of them quoted officials who described Trump unkindly. Defense Secretary Jim Mattis assigned Trump the academic capacity of “a fifth- or sixth-grader.” White House chief of staff John Kelly, Treasury Secretary Steven Mnuchin and former chief of staff Reince Priebus all called him “an idiot.” Economic adviser Gary Cohn suggested Trump was “dumb as shit.” National Security advisor H.R. McMaster soft-pedaled a bit, calling the president “a dope.”

Note that this blog post focuses only on Trump’s intelligence, not his temperament, diplomacy, lack of empathy, racism, misogyny or general delight in cruelty. Just his intelligence.

It wasn’t long before Trump found the expression he would hashtag for himself; “#StableGenius.” 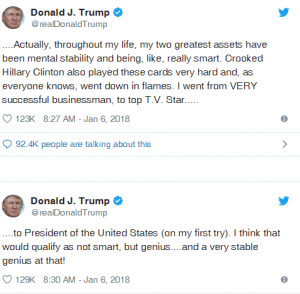 He loved the phrase, repeating it in tweets on May 23, 2019 and July 11, 2019. The first instance involved an attack on House Leader Nancy Pelosi and a temper tantrum. In one of those cringe-inducing “Dear Leader” events where he name-checked aides, Cabinet Members and members of his inner circle to hear their flattery, he invited their judgment on his demeanor. Counselor Kellyanne Conway described him as “Very calm. No temper tantrum.” “Calm” was echoed around the room. Uh-huh. 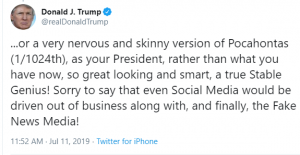 and good looking too

Ultimately, Donald Trump believes only in himself, his ideas, his beliefs and his gut. It is unfortunate that a significant number of his base, many or most of them, accept his word, his delusions as well as his outright lies, as gospel. The real problem with Donald Trump really is that he thinks he’s a genius. And naked as a jaybird when it comes to those presidential garments and the GOP. 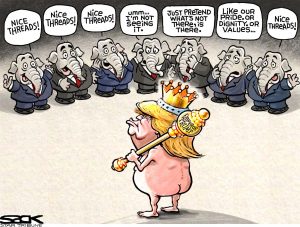