The Mouth That Would Be President: Endgame

It is July and Cleveland is battening down the hatches in anticipation of Tornado Trump. The Drumpf has been sitting pretty as “presumptive nominee” since early May and Ted Cruz’s disappearance after the Indiana primary. Hillary could not rest easy, as it were, until just about a month later when she collected the delegates in New Jersey and anticipated a win the following day in California.

And now it is down to the final few moves.

Will Trump’s bigotry and insults energize more voters than his outbursts repel? Are we about to see a Supreme Court tilting into the darkness of religious fanaticism and oligarchic greed?

Will Hillary’s baggage weighted with emails and hefty speaker’s fees paid out by Wall Street businesses drag her, the Democratic Party and the ideals framed by the writers of the Constitution, down to the same hell to which Hans Christian Anderson’s “Girl Who Trod on a Loaf” was consigned?

And I am scared as hell.

I am mostly scared because so many Berniecrats seem committed to taking down Hillary even though Sanders no longer has a viable candidacy—he should have conceded way back and endorsed Hillary’s candidacy—and even while they express their disdain for Trump. 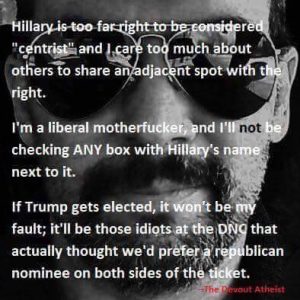 where the fault lies

One young Berniecrat I know who floods his Facebook feed with both anti-Hillary and anti-Trump posts offered this:

“If Trump gets elected it won’t be my fault; it will be those idiots at the DNC that actually thought we’d prefer a Republican nominee on both sides of the ticket.”

Well no, I responded. “Let’s be clear. This is a matter of numbers not morality. If Trump gets elected, it will be the fault of every registered voter who did not vote for Hillary.”

It’s a matter of numbers.

The Young Berniecrat continued with his argument that the DNC suppressed and manipulated the vote in pretty much every primary and caucus. In fact, he suggested, Bernie had won the primary; it is just that the system was rigged against him.

Now I am a person who largely pooh-poohs conspiracy theories, mainly because I think people are not especially intelligent, cannot conceive let alone execute byzantine plots, and cannot keep the secrets essential to the success of conspiracies.

I reiterated my position that a Democratic success in November is incumbent on registered voters going to the polls and voting for Clinton (and against Trump). If the Berniecrats succeed in suppressing Democratic voter turnout because of their ongoing issues with Clinton and the Democratic National Committee, and Trump is elected, the fault will lay not in our stars or some vast conspiracy among Democrats against Independent, “Democratic Socialist” Bernie Sanders (who is not even a Democrat, although that is the party he sought to lead), but on every registered Democrat who did not vote and vote blue.

And despite several more responses from the Young Berniecrat, I let the discussion lapse.

This election is about correct the rightward list of the Supreme Court, protecting all citizens from a Christian fundamentalist theocracy, and navigating the nation through the perilous waters of international trade, politics and the global threat of the Islamic State and its jihadist allies.

Will Clinton and Democrats guarantee us safe passage and an economically secure ship of state through the next four or eight years? Oh heavens, no.

But the Drumpf almost certainly ensures disaster on all fronts and an all-out war on recent immigrants, newly minted citizens, people of color, people of non-Christian beliefs, pretty much anyone not one of his rag-tag, foul-mouthed, White Supremacist militia who imagine that the phrase “make America great again” actually means something. 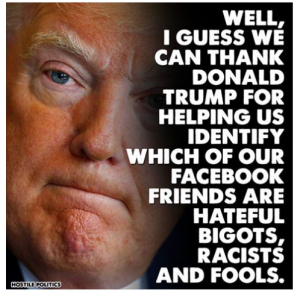 separating the wheat from the chaff

I know he would like to think that that is true. At this point, however, it isn’t.

If your goal is to inaugurate the Mouth Who Would Be President, then by all means attack Clinton and attack every individual running on the Democratic ticket, and vote for Donald Trump and whomever he selects as his campaign playmate.

If your goal is to ensure that Washington DC remains a Trump-free zone and that this nation and her peoples—all her peoples—have any chance of “life, liberty and the pursuit of happiness,” however amorphous those rights are, then suck it up if you have to and vote for Hillary Clinton. And then get to work electing Democrats you can believe in and fixing what you think is wrong with the Party.