There has been a lot of retrospection in this time of COVID-19. Who if anyone at the top levels of government could have anticipated a pandemic and prepared the nation for such an event?[i] With China being so secretive and all, how could we have known the nature of the disease and the scale of the outbreak in Wuhan?[ii] Surely the president would have been able to attend to such challenges if he had not been deliberately and incessantly distracted by the Democrats’ impeachment proceedings.[iii] 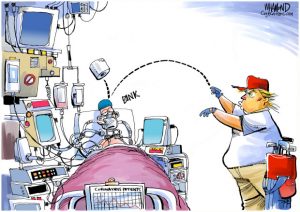 As COVID-19 exploded across the United States, common sense and local edicts confined us to our homes. Mitigation became our code word and social distancing our rule. As one deadline (you should pardon the expression) after another faded from my life—no lectures to prepare, no drafts to submit, no anything left that I had to do—I found I could not concentrate. Even reading, one of my greatest pleasures, requires more discipline than I can muster.

The Job At Hand 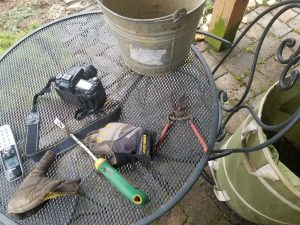 The weather, however, turned damply vernal and weeds spread as far as the eye could see. Birdsong outside was seductive and the need to clean house was not. I dressed in my ragged and filthy overalls, old tee shirt, cotton socks and work boots. I gloved up and assembled my essential tools of dandelion weeder (my go-to, all-purpose digger) and pruning shears.

So many weeds. So many different garden areas. The ones that dominate are hairy bittercress, annual bluegrass, dandelion, deadnettle, and common chickweed. As my old galvanized bucket fills with plant waste, sticks and dead leaves, I empty it into a canvas bin and empty the bin on the brush heap a little way into the woods. 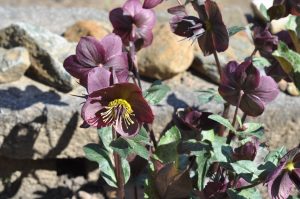 At first, I cleared the ground around the handful of perennials that have survived and ventured into the spring warmth: some ferns, a few astilbe, my beloved hellebore and the miscellany that constitute a rock garden on the north side of the house. I had a vision you see, well more of a fantasy, about how trees and shrubs and seasonal blooms and heaps of stone would offer changing views and appealing structures, even in the grayest months and under mounds of snow. 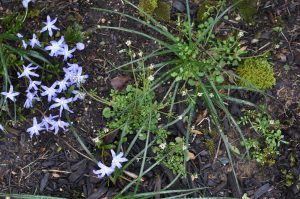 As I poked into the dirt, my memory conjured fragments of those original visions. Surely, I had not intended there to be such undulating mounds of juniper, next to the garage, overgrowing into the sidewalk? What about the red and white astilbe, the little blue glory-of-the-snow, the ferns in the back and the crocuses in the front? I started pruning the juniper with my shears. Then I started hacking at the juniper with my Dear One’s battery-powered saw. Then I reduced three of them to stumps.

Oh look! I found ferns! And a couple of glory-of-the-snow! The two bird’s nest pines, now that they have a little breathing room, look good, have nice texture, interesting variation in height. So… if I extract two more junipers, will I have space for a fragrant Carpet Rose, a white one, in the spot where the summertime sun arrives by 10:30 in the morning and remains until well after supper?

Over the years, one plant after another failed to thrive or was chewed by deer. Not so hellebore. I can no longer name the varieties but they flower in every imaginable shade from creamy white and palest green through pinks and shades of red to deep, dark purple. For some unfathomable reason they have settled in where ferns of various kinds have not. Once upon a time I imagined masses of ferns, royal ferns, Christmas ferns, Japanese ferns, all kinds of ferns, bowing and curtseying in a sort of feathery woodland pavane. That dance has not yet happened. 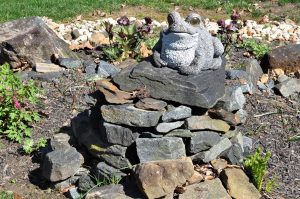 My social-distancing hours have offered ample opportunity to weed, assess and plan. As I study the current state of my horticultural affairs, I realize what I should have anticipated had I paid attention to the information provided about growth habit and mature size. I would have known more about my choices if I had studied expert opinion on what would grow well where. I was distracted, however, by the myriad tasks of life and focused excessively on dreams of flowers in bloom on plants that simply regrow themselves without my attention or labor. We all face distractions; I am aware that mine are no excuse for my magical thinking, my errors and my bad choices.

[i] A number of people in leadership warned of this likelihood and the Ebola event of 2014 resulted in the establishment of a pandemic response team under the aegis of the National Security Council. John Bolton, then the National Security Advisor, under the direction of President Trump dismantled that team in 2018. There were other warnings from other agencies starting even earlier. Preparations were eschewed at the federal level in favor of reactive, scatter-shot efforts, although several governors quickly grasped the implications of the pandemic.

[ii] Trump’s Economic Advisor Peter Navarro penned a pair of memos in January and February foreseeing dire consequences for the economy posed by the spreading pandemic. Trump, however, continued lying about the unassailable strength of the stock market and the invincible strength of the American economy well into March.

[iii] The first hearings of the impeachment inquiry were held on 12 December 2020; Trump was impeached on two articles on 18 December; after Senate Majority Leader blocked all witnesses from the Senate trial, Trump was acquitted on 5 February 2020.