The Baltimore Sun provides a daily update of COVID19 infections and deaths across the state, breaking them out by counties and also by age and race/ethnicity. I look for that long, horizontal gray box and the Harford County numbers in my paper, without fail. 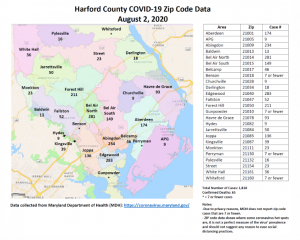 Obsessive? Paranoid? Both of those things perhaps. Most of all I am watching for evidence that it is time to unseal that hermetic behavioral bubble that surrounds our home and our lives. At least perhaps we could make it more porous.

Harford County occupies the farthest suburban edge north-northeast of Baltimore City. When I moved here in 1989, it was still largely rural. Since then great swaths of forest, farms and orchards have been replaced by housing developments, but we are still comparatively country. The local politics are very conservative, if not bright red in this Navy blue state, then a sort of purplish crimson. Maryland is also south of the Mason-Dixon line. The “Colored School” in Havre de Grace, down the street from my first apartment here, was in use through the academic year 1964-65, when schools were finally integrated. 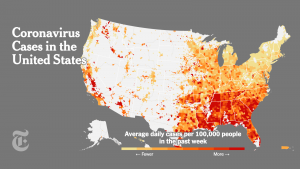 Because Harford County is less densely populated and includes a fair percentage of die-hard Trump supporters, acquiescence in the matter of wearing masks and social distancing has been hard won. The fact that Governor Hogan is a Republican has no doubt helped his aggressive public-health measures find wider acceptance in Maryland than might otherwise have been the case. That’s been good. At its worst, our COVID19 rates of infections and deaths have been modest, certainly compared to, say, Baltimore City and Prince George’s County. On the other hand, Harford County was one of the places Hogan first started reopening businesses and recreational areas. It felt premature.

If our house is a bubble, however, and the county is something of a buffer zone, I am aware that there are numerous jurisdictions out there where infections are rising faster than the thermometer on an August day during a Maryland heatwave.

The Rising Curve of COVID19

And this makes me anxious. The rising curve of the COVID19 graph in this county makes me more anxious. 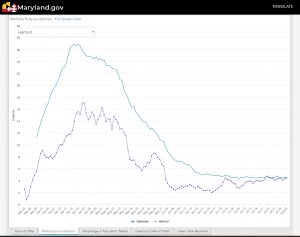 Harford County and the State of Maryland

We have sacrificed our comforts and conveniences because we know we are our brothers’ keepers, at least until there is a reliable vaccine. We have severed ourselves from the embraces of our children and grandchildren because we know that the only way to get the disease under control is to rigorously follow the recommendations of the CDC and the blessed Dr. Anthony Fauci. We have been living the responsible life since early March and that is five months as of this writing. Our sanity and our marriage have been propped up on the belief that this too shall pass.

But will it? Can Americans control themselves enough to control the spread of COVID19? Are Americans willing to join in the international culture of mask-wearing, crowd-reduction and hand-washing for no other reason than it is the right thing to do? Or are we too mummified in our starry, stripey shrouds of red, white and blue to enter into a less familiar life, even if that life is the only means of survival? 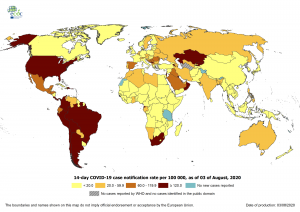 COVID around the globe

Those of us who had recognized, let alone felt, the impact of the disease, had been hopeful that there would at least be a pause between the first wave and the predicted second wave. Apparently there will be no pause, none, at least, that liberates us or the economy. What we are getting instead, thanks to the absence of leadership and the attitudes of narcissistic omnipotence of too many Americans, is the sure knowledge that this killer will come and go with a smirk, promising: