What the heck is with the fixation on the beauty parlor? You’d think that hairdressers were emotional support animals, for all the anxiety that separation from them has generated.

Talking heads on news programs apologize for their disheveled appearances and celebrities post pictures of self-administered haircuts. Youtube videos explain how to color gray roots and top-shelf stylists send custom coloring kits to their well-heeled clients. Men and women stage armed protests at their centers of government because their liberty to visit the salon of their choosing has been temporarily suspended—so that fewer people contract COVID-19 and die.

They are all insane. And silly. And clearly a few strands short of a ponytail.

When I was a child, my mother buzzed my brothers at the start of every summer. In high school, my friends and I routinely trimmed each other’s hair. Everyone survived. There was no blood. 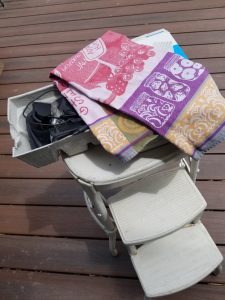 I have been grooming my Dear One’s locks for several years now. He has long loathed going out for a trim and saw no reason why I couldn’t hack his fine waves into submission. I was a little dubious at first but it’s just not that hard. Our marriage has survived. Without bloodshed.

He’s not the first fella I’ve barbered. My musician boyfriend in 1970 required a straight trim on his pageboy bob. The MIT students living next door brought in a classmate of Middle Eastern extraction who wanted to get cropped before returning to the household of his very conservative father. I performed admirably on that mop of ebony curls as I recall. With my sewing shears.

Sherry has done my hair since 1997, and by “done” I mean trim and tidy as I haven’t changed my style in a little over twenty-three years. I’m disinclined to fix things that aren’t broken. I haven’t seen her since February. We set our next get-together for April and by then Governor Hogan had closed down all non-essential businesses in Maryland.

It’s okay. Things were already out of control as I had missed my November appointment. A couple of trims delayed, though, is length accrued and I had started thinking about revisiting my misspent youth and letting it get longer still. At this point I see progress; I can now braid a pair of little stubs.

I don’t worry about my gray roots either: no dye, no roots, no problem.

I come from a line of the prematurely gray. My Nannie’s plaits were silver by the time she was in her mid-twenties. Her husband, my Pop, was gorgeous salt-and-pepper by early middle age. Granny, Dad’s mom, had crinkly iron-gray curls . My first white threads appeared before I was thirty; soon enough my hair streaked white at the temples, not unlike “Paulie Walnuts” (Tony Sirico) on the Sopranos, before I turned forty.

In fact, I remember the day, at least thirty years ago, in a gallery in the Pennsylvania Academy of the Fine Arts in Philadelphia when my Dear One exclaimed, “ Your hair is really gray!” And so it was.

It does make me wonder, on the other hand, how the president is keeping his blond bouffant colorful and intact. Of course the creation of that coiffure is a state secret, information more suppressed that the contents of the Trump Organization’s income tax returns. I doubt that even a unanimous opinion from the Supreme Court of the United States will change that. 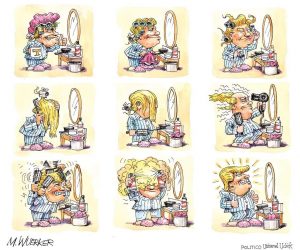