May 22nd, 2020 | Gardens and Gardening, General, Health, Politics, the world and Mother Nature

This morning, I found an ear of deer corn dug into one of the pots of newly planted begonias. We are assuming the culprit is Elvirus, but it could have been a squirrel. We have a lot of squirrels and they plant acorns all over the place and make a mess of containers prepped for the summer crops. 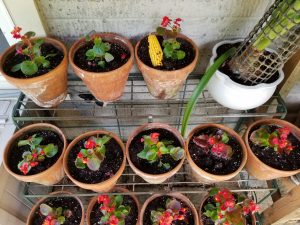 amaryllis, begonias and ear of corn

Who is Elvirus? Elvirus is the raccoon who introduced herself as our housemate about a week ago. My Dear One named her. I had learned from a Facebook meme that the raccoon is the spirit animal of the corona virus—“raccoon” is an approximate anagram of “corona”—and suggested we name her “Corona” rather than the generic “Rocky.” My Dear One suggested “Elvirus,” making the leap from the bug to the Dallas Frazier song, “Elvira.” He is so much better at naming thing than I am. 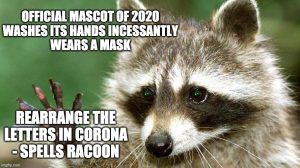 We get raccoons pretty regularly and bringing in the bird feeders at night is a fact of summertime life. What was interesting about this raccoon, though, was that she wasn’t the least bit intimidated by our yelling when she dropped from the railing into the bed of radishes. Next time she came back it was early evening.

The day after that Elvirus arrived in the later afternoon; the light was good, so I followed her around taking videos. She slithered down the post to the garden, I jogged down the basement stairs and out the back door, and followed her at a socially-distanced six or eight feet. She went back up to the deck and so did I. She returned below I stayed with her. Eventually I went back upstairs and watched her wander off to in a southerly direction. 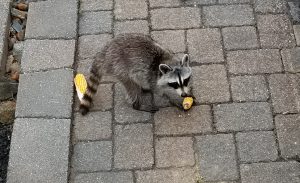 The following morning, Elvirus arrived for brunch around ten-thirty. That night we set up the critter cam and put out a couple ears of deer corn as inducement. She crunched on that corn for the best part of an hour; I checked on her every so often until it was too dark to see her on the gray pavers twelve feet or so away.

What About the Children?

What we really want to know is whether she is living under the shed. I’ve snapped her disappearing into that space and videoed her poking her head in. She’s about the size of the calico cat who raised a litter there about eight years ago—and while we haven’t seen kits, Elvirus is clearly a nursing mom. Got a good look at her tummy as she shimmied up the bird-feeder pole yesterday. Definitely a she. And if she is going to be a housemate for the next little while, we’d really like to see the babies. A Facebook friend asked what we would name them. I considered Ebola, Coldie and Influenza; she suggested Pox, Measles, and Sars. All possibilities.

Do we really want her sheltering at home with us? Probably not. She is a wild animal, which is to say that despite her general calm and affability, she is not a domesticated species. Her health seems good, no signs of rabies, but I doubt that she is getting regular check-ups. I suspect she’d walk right on into the kitchen if I left the sliders open. Don’t want that. I helped my stepfather Charlie clean up raccoon games in the kitchen after some kids broke into his house in Vermont and left the doors ajar when they left. Not in a hurry to repeat the experience.

Is she more desirable company than all those irate “Liberators” who seem to think that quelling the pandemic and saving lives is not worth the inconvenience of closed businesses and obligatory face masks. Most certainly she is. I concede that the economic impact of COVID-19 has been catastrophic to huge numbers of Americans. I don’t think we can return to solid financial ground until and unless we tame this wild new virus. Nor do I think my Dear One and I can safely move from Elvirus’s fellowship to that of our community at large. Not just yet. Not for a while. Not without masks in addition to at least six feet of separation, whatever the opinion the president may share. 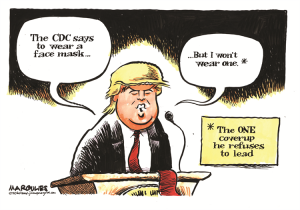