The howl of fuck  fuck  fuck that tore from my heart and mouth on the morning of November 10, 2016 echoed again as I saw the headline on my cell phone.

The Best on the Bench 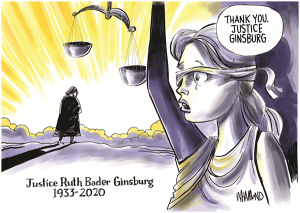 She died on the first night of Rosh Hashanah. I understand that according to Jewish tradition, a person who dies on Rosh Hashanah is a tzaddik, a person of great righteousness. That tzaddik brought her erudition, her wisdom and most of all her unwavering moral compass to the Supreme Court of the United States. She swore her judicial oath on August 10, 1993.

Righteousness. While we as a nation seem to be drowning in self-righteousness, there is blessed little willingness to deeply examine the nature of right and wrong, of fairness and inequity, of the nature of justice and how it is both the equitable application of the law and a product of moral questioning that leads toward enlightenment. To be truly righteous.

Her leadership of the “liberal wing” of the Court has been exemplary. Her confident, accomplished, good-humored and decent womanhood gave more than a generation of girls and women a role model they could depend on, no matter what their circumstances or goals.

A Woman After My Own Heart

The Notorious RBG. Yes indeed. She stood up for law as she understood it—and dined and went to the opera with her political and judicial opposite on the Bench, Justice Antonin Scalia. She maintained a schedule of physical workouts I, someone nineteen years her junior, could never manage.

She signaled her opinions with neckwear the way that Madeleine Albright and Nancy Pelosi do with their brooches. She donned the yellow jabot, a gift from her law clerks, to announce a majority opinion. The gorget that conveys the seriousness of medieval armor told us when she was about to dissent. A necklace that manages to convey the irritation of ruffled feathers and the danger of metal spikes came out for the first group portrait that included newly appointed Justice Brett Kavanagh. Her favorite, a geometric lace of knotted white threads that she got in South Africa, was worn on December 31, 2005, on the occasion of Barack Obama’s first address to a joint session of Congress.

Justice Ginsburg had been gone for less than a day when Senate Majority Leader Mitch McConnell announced that he would call for a vote on her replacement before November 3. As she was dying, she dictated a statement to her granddaughter Clara Spera: “My most fervent wish is that I will not be replaced until a new president is installed.” McConnell, however, intends to secure that seat immediately as Donald Trump’s victory is by no means assured. 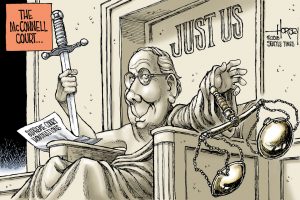 In the last year of Obama’s second term as president, following the death of Antonin Scalia on February 13, 2016, nine months prior to the general election, McConnell refused hearings, let alone a vote, on Obama’s nominee, Judge Merrick B. Garland. It was necessary, McConnell said, to await the outcome of the presidential election. It was a demonstration of respect for the people, he said, to see who they elected president before that president might nominate a candidate. That the people had elected Barack Obama seemed irrelevant to him. That there was no precedent for delaying hearings and vote for a full year, until the new president would be sworn in, did not matter.

Now, of course, with Trump in the White House until at least January 19, 2021, McConnell has changed his tune. Despite the imminence of the  2020 election—and the fact that voting has already begun in four states—McConnell has every intention of seating a new justice that will guarantee control of the Supreme Court for the next thirty years. At a minimum.

It is, of course, McConnell who is pulling the strings here, and has been all along.

Lehitraot, Justice Ginsburg, farewell. May a worthy successor be on the Supreme Court once again. Soon.