Is everyone still there?

How to recount the year’s doings when we have done largely nothing? My favorite word–one of the three Oxford Languages chose for Word Of The Year–is “Blursday.” It perfectly describes the mush that time has become. Last year and for years before that I put clean sheets on the bed on Sunday. In the COVID universe I could swear Sunday starts every forty-eight hours. I depend on the house alarm to tell me what the date is each morning when I disarm it. Probably shouldn’t bother looking; it rarely matters what day it is.

My Dear One and I had plans, of course. Or at least we had plans to make plans. The only appointment on our calendar at the start of the year was my cataract surgery in March and I was pretty pumped about that. Then it was cancelled. Twice, in fact, but in July the eyes finally got done. The results are perhaps less perfect than I had hoped for but sitting at my desk typing unbespectacled is an experience still novel to me.

Sheltering at home has been our status quo since spring. At no point has it seemed safe to venture too far into public places, so we haven’t, and will not, for either Thanksgiving or Christmas. We spent a socially mostly distanced Father’s Day celebration with My Dear One’s daughter, and her family in their backyard, but even that was unsettling. I am not quite sure when I last saw my Tattooed Boy in person; we connect mostly through texts and the occasional phone conversation. He was laid off from the restaurant for a while but he’s back at work now as long as COVID rules allow. During the spring hiatus the Boy joined a group of fellow rock music enthusiasts in a weekly livestream on Facebook, The Metal Summit. That tiny square he occupies on the screen has to be enough until shared space and hugs become normal again. The prospect of vaccines makes us hopeful, though, and we’ll be following our doctors’ recommendations on that.

With our travel budget untouched, we redistributed funds to home maintenance. The roof has been redone and a new toilet and tiled floor will be installed soon in the basement bathroom. In early 2021 we’ll be tearing out the vinyl and carpeting in the kitchen and family room and replacing both with wood flooring. Then at some point a generator arrives for when the power goes out, as it occasionally does. Improvements seem to take a lot of time. 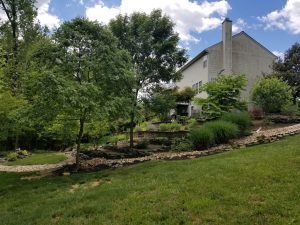 garden at its best

Gardening went on hiatus in the heat of the summer but I weeded, pruned, planted, mulched and schlepped my way through the cooler weather of spring and fall. I don’t think our humble estate is going to win any design awards, but it does look a little less forlorn. Feeling the damp ground through my overalls as I dig away, sensing the movement of air, listening to the birds, slows the clock and keeps me in an ongoing present that otherwise seems elusive.

Then there are all those landscaping errors to repair. The first years at this address were spent putting things in; nowadays we have to figure out how to take some of them out. I had no idea, for instance, how large the pussy willow we grew from a twig could get, or how fast it could get that  big. Ornamental grasses have overwhelmed one area and a black willow, also grown from a cutting, is equally unmannerly. I was astonished that  grape hyacinth would turn invasive. I knew they naturalized but I didn’t think they would run amok. Yanking them out by the fistful was both satisfying and distressing, but a number of  furred and feathered friends have enjoyed poking about in the disturbed ground.

Some of our wildlife also observed social distancing.

The deer visited less often and kept the fawns well hidden. Foxes were similarly cautious. Birds, however, flocked to the yard including an increased number and variety of raptors. The fattest and sleekest gray squirrels imaginable have completely overrun our domain—terrible pests in our opinion.

Quarantine also introduced us to a racoon who all but moved in during the spring. Elvirus (my Dear One named her for the Dallas Frazier tune “Elvira” popularized by the Oak Ridge Boys) came for the birdseed and stayed to get to know us better.

She posed for cell-phone photos and videos on the deck; she would have joined us in the kitchen had we let her through the sliders. When encouraged to vacate the upper precincts, she calmly moved to the terraces below. I captured later visits on our critter cam, getting pictures of Elvirus and four kits foraging at the edge of the woods in the dark.

We were wondering if she nested under the shed by the herb garden. Nope. That’s the woodchuck’s territory.

But these are inconsequential doings. The lasting joys are the ties that bind us with each other. My brother the lawyer and I have gotten into the habit of regular phone calls, to gossip, talk politics, ask advice and share the doings of our kids. During one such call, his daughter hollered commentary through her mask from the back seat of the car. Marvelous! I can barely remember the last time I saw her and now she is a delightfully opinionated young woman. I reconnected with my niece A on Facebook. We discovered we share a taste for eggplant, an aversion to people who yell, an appreciation for adult coloring books and a desire to reweave family fabric where it has worn thin.

2020 has generated countless—and justified—complaints but this has been only one of many times of struggle, just another moment that individuals have found difficult to face. The Irish poet Derek Mahon, who died in October at the age of 78, wrote this poem in 1979 during what was described in an obituary as “a spell in the hospital” to deal with an “acute drinking problem.” 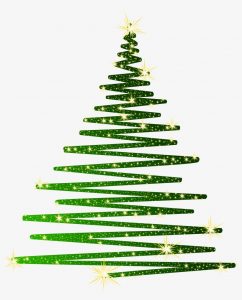 Everything Is Going to Be All Right

How should I not be glad to contemplate
the clouds clearing beyond the dormer window
and a high tide reflected on the ceiling?
There will be dying, there will be dying,
but there is no need to go into that.
The poems flow from the hand unbidden
and the hidden source is the watchful heart.
The sun rises in spite of everything
and the far cities are beautiful and bright.
I lie here in a riot of sunlight
watching the day break and the clouds flying.
Everything is going to be all right.

So here’s to a 2021 when everything is going to be all right or at least a little better for us all!