It is Thanksgiving and it is meet that I should count my blessings.

Despite the explosive rates of COVID infections, the disease has not breached our defenses. Nor has my Tattooed Boy fallen victim despite his return to his workplace. An uncrowded dinner table reminds me of holidays my Tattooed Boy and I celebrated à deux, an endearing memory. I am grateful, however, that Rumbleway Farm  assigned us #53, the smallest turkey they produced this year. At just 11.4 pounds, it’s a lot for two but not unmanageable.

Despite my digital ineptitude, I have mastered Skype, Zoom and Google Meetings. We are even comfortable with whatever platforms our various medical practitioners use for video appointments.

I am thankful, most of all, that Joe Biden and Kamala Harris won. They won the popular vote by an ample margin. They locked in the electoral college majority that ensures we will have a new administration come January 20, 2021.

It looks like the tally that will be certified when the electoral college meets on December 14 will be 306 for Biden and 232 for Trump, and exact reversal of the 2016 results. 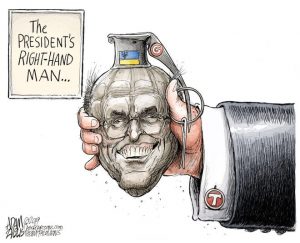 winning by any means necessary

Donald Trump claims that he won—by “a lot”—but he can’t get a sufficient number of  governors, secretaries of state or judges to see things his way. Apparently, it is hard to prove “massive fraud” and a “rigged election” when your only evidence is the wet dreams of OANN and NewsMax.

Trump’s campaign lawyers, whipped on by Rudy Giuliani, appealed a decision by a lower court that dismissed the effort to halt Pennsylvania from certifying its election results. The appeals court judge, Stephanos Bibas, who wrote the decision upholding the lower court, was appointed by President Donald Trump. That must have stung.

Every reasonable news service dealing in verifiable facts declared the Biden-Harris victory on November 7. On November 23, Emily Murphy, whom Trump named head of the General Services Administration, caved and signed the letter permitting the formal presidential transition to get underway. That hand Trump thought was doing the feeding seems to have suffered a number of bites.

The COVID crisis will get worse before it gets better. 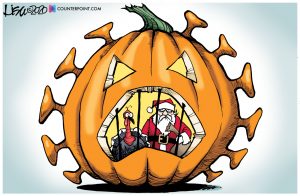 It’s not over yet.

Vaccines may eventually ensure a sort of her immunity but that is unlikely to be the case much before 2022. In my opinion.

The Trump administration is leaving behind an Augean stables of crap. There’s no riverine force that Biden-Harris can divert to clean it up quickly and efficiently. 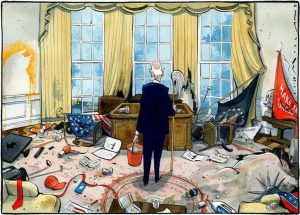 The mess left behind.

Individuals appointed to Cabinet posts, advisory roles and other positions, major and minor, will be educated, have expertise in the tasks they are assigned, and will believe in science and empirical fact.

I will get the best birthday present imaginable when Jon Ossof and Raphael Warnock win their races in Georgia on January 5, 2021, and hand Senate control to the Democrats.