I hate that “thud.” It always means a bird has mistaken the sliders—despite the raptor and leaf decals—as navigable space. The first thud we heard was a male red-bellied woodpecker only a few days after we had moved in. Then there was a goldfinch. Maybe a couple of goldfinches. Later on a downy woodpecker. Fortunately, we have suffered no fatalities.

My Dear One had recorded the awards ceremony for the Gershwin Prize for Popular Song. Garth Brooks was the honoree. The remainders of our traditional New Year’s meal of pork, sauerkraut and mashed potatoes was warming on the stove. Then there came that disturbing thud and I went to investigate. 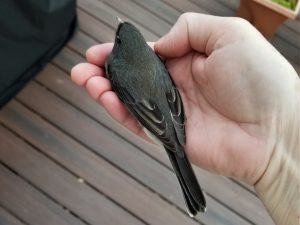 A male junco lay on the deck. Sigh. Please, lord, let him be okay.

I stroked his back and he moved his head. Excellent. No broken neck. I let him be for a minute or two, but it was so cold and I was so uncertain that he was okay. I lifted him into my hand. His eyes were bright jet black. He seemed unwilling to move but when I set him on his tummy, he seemed comfortable.

The Rules of Survival

The first rule of wildlife rescue is to leave well enough alone. While I worried about the cold, I reminded myself that juncos are called “snowbirds.” Ours arrive here in Maryland only when the temperatures chill.

I settled my little friend on the lid of the grill, thinking that the cover would be less cold than the boards of the deck. Maybe that relatively elevated perch might encourage him to fly. I folded a kitchen towel and created a modest windbreak and scattered a few seeds in front of him.

Then I returned to the couch and Garth Brooks. It was an amazing performance. As he was being honored for his own songwriting, he performed his way through a virtual songbook of popular music since the 1970s. Between Garth and my injured bird, I was utterly verklempt.

I checked on my junco every five or ten minutes. Hadn’t left. Still there. Oh, but there was a positive sign; he had pooped! I could see a small puddle of guano under his tail. Okay, poop is a sign of life, right?

Garth called me back to the couch. My dear One and I finished up the leftovers which were, by the way, absolutely delicious. I drank down my red wine and my Dear One cleared the dishes. 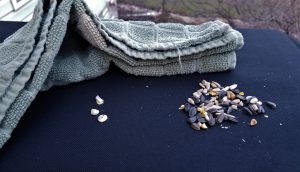 My Dear One repeated himself. “He’s gone,” he said. Then he added, “He’s flown away.”

I was thrilled and jumped up to look. My dazed junco was gone. The folds of the towel embraced nothing. The little pile of birdseed remained. Three drops of white poop marked where he had lain.

My junco had survived his collision with humans and their unnatural constructions and winged back to his flock.

And suddenly my heart felt lighter, the future more hopeful. Was it an omen?