The Chapters In This Story Are Still Being Written 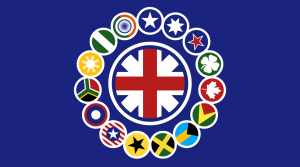 flag of the English-Speaking Union

The Sunniest of Omens

In August 1969 I was at our cottage on Squam Lake in New Hampshire with my mother and sister, assembling wardrobe and finalizing travel plans. One evening as we sat in the screened porch some twenty feet from the water’s edge, an immense thunderstorm broke—great flashes of lightning and buckets of rain. Suddenly, skirting the shoreline just off our dock, we saw an aluminum canoe barely afloat.

We pulled the occupants to safety, hauled the craft out of the water and hustled the drenched paddlers inside for a toweling off and warm drinks. One was from the UK. I told him where I was headed and he said, “Oh, my Uncle John is the chairman of the English-Speaking Union.” Uncle John was Sir John Benn. Coincidence? No. The sunniest of omens. 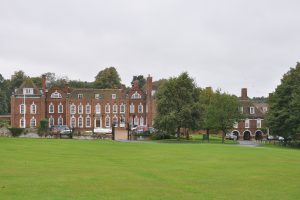 Mrs. Gross, the Matron, and her young son Henry, collected me at Dartmouth House from whence we had been bussed from Heathrow. We took a train from King’s Cross to Hitchin and a car to Princess Helena College in the village of Preston where they deposited me in a large, somewhat shabby wood-paneled library room to await the headmistress. Almost immediately a perfect English rose of a girl came belting down the stairs. Was I the ESU student? I was? She belted right back up the stairs.

Come late June, I hosted a farewell picnic of bread, cheese on the hillside near the games fields. Secrets spilled as we lolled in the late afternoon sun. Nicky had burst up onto Maid’s, the demesne of the Upper Sixth, exclaiming, “She’s here, the E-SU is here!” The others gathered around and asked, “What is she like?” Nicky paused, thought, then responded, “She’s enormous!”

Miss Catherine J. Stratford, Headmistress, was possibly the homeliest person I had ever seen. Her back bent to the side and she had hands like claws; her conversation revealed an astonishing overbite. She led me from the library into her office, settled me into a comfortable chair and inquired, “Do you like your sherry sweet or dry?” I perked right up.

Stratty had remarkable judgment and trusted her instincts, grounded as they were in an expansive view of the world. She frequently made me a chaperone on lower school excursions; I well remember Ely Cathedral and the abominable behavior of my charges. After weekends visiting a Scottish friend at Oxford and an English one at Cambridge, Stratty drily opined that I might be “mixing my blues.”

When flu swept through the school just before Christmas, she climbed to Maids Corridor with a bottle of Irish whiskey, poured each of us a tot, and sent us to bed. We would be needed well-rested the next day to pack up the little ones and get them off for winter holidays. 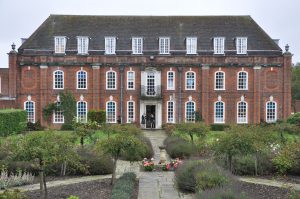 view from the rose garden

In the late winter, I received an invitation to a luncheon at Dartmouth House for prospective ESU applicants. Stratty of course said go, by all means go. Then she added, “Why not take the day. There is an exhibition at the Royal Academy I have heard good things about.” So I went. The show was “1000 Years of Art in Poland.” It was utterly spectacular: artifacts from the pagan era, elaborate Christian liturgical objects, sculptures, paintings and even a few startling things from the Soviet era. To this day I remember a medieval polychromed pietà, whose power dramatically outweighed its small scale.

When people ask me why I became an art historian, I cite this as a seminal experience. I had gone to Burlington House out of a calculated obedience: take suggestions from the powerful and stockpile goodwill. This time, however, Stratty offered a subtle lens through which I glimpsed possibilities; for once I started to think seriously about my future.

Late in the year, at a lunch no different from any other, I sat across from Stratty at Head Table. I don’t remember the conversation but I do remember thinking how wonderful her eyes were, intense emerald-green eyes, full of intelligence and wit, under dark straight brows. A little voice came into my head. “But she’s the homeliest person you’ve ever met.” No, I realized, she wasn’t homely. She was kind, brilliant, funny, practical, and more. She was absolutely beautiful.

I wish I could say a year on ESU added to my academic accomplishments. It didn’t. I got an “A” for the Greek Literature in Translation O-Level. I got an O-Level pass in my French A-Level. I entirely bombed the Scripture A-Level. Didn’t even take a shot at the literature test. Horrifically difficult exams, they were quite unlike anything I had known in America. 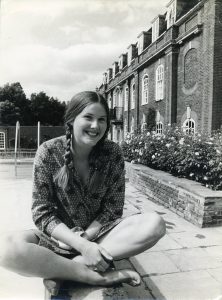 The experience, though, came in handy some years later when I coached the daughter my PHC classmate for her Art History A-Levels. Tali knew her stuff but couldn’t seem to turn that knowledge into coherent essays. The chemistry between Tali and her Art History teacher was, moreover, not good, so Sami, her mum, asked my help.

A-Levels. Been there, done that. And I was familiar with the American AP art history test. I was pretty sure I knew what Tali would have to face.

As there is no way to predict the questions or rubrics, Tali and I worked on strategy. We talked about decoding the questions and reshaping them to focus on information she knew best. We reviewed the importance of not just making pronouncements but providing evidence for every assertion. Tali aced that A-Level—much to the astonishment of her teacher who later made some ill-considered comment to Sami about why it had taken Tali so long to buckle down and just do the work. Sami merely murmured something like, “Yes, um, well, quite,” and let it go.

In 2004, I was stunned by a squib in the paper. Her Royal Highness, Alice, the Duchess of Gloucester, aunt to Prince Phillip, had died just fifty-seven days short of her 103rd birthday. Memories flooded back.

That year at PHC had culminated in an elaborate Garden Party to celebrate the sesquicentennial of the school’s founding, in 1820, by Sophia Williams. Sophia’s ambition was to train daughters of fallen military officers as governesses, in order that they might find respectable employment. We planned an original theatrical performance presenting milestones in the school’s history from its earliest days to its renaming for a daughter of Queen Victoria, and the acquisition of new campus. The main house, an Edwin Lutyens design, sat on a property once home to the Knights Templar. Sami headed the team that sewed costumes. I agreed to wind a number of heads in rag curls nightly. Fifth-formers and their hair. Producing those ringlets was a horror show.

But the Garden Party was the thing. Of course there would be cream tea. Of course the guest of honor would be our Royal Patron, HRH, the Duchess of Gloucester.

We plotted every detail at High Table. Stratty told us that she had bought a colorful turban at Liberty of London and planned to wear shades of toast because HRH reliably wore blue for such events. I was fascinated by it all.

Stratty rehearsed me every evening for a week on protocols and curtseys: “Yes, your Royal Highness, No, your Royal Highness, Yes ma’am, no ma’am.” As the sole representative of both the United States and the English-Speaking Union, I felt the pressure. Fortunately, the day went well, Sun shone across that verdant landscape. Strawberries were sweet and perfumed. The pageant went off without a hitch. I dropped an acceptable curtsey at introductions; I fell over a chair at farewells.

Postscript: as I tinkered with this story, I received an email from the current Head of Princess Helena College. At the end of the academic year, 2020-2021, the school will close permanently, yet another victim of COVID-19. The news transforms my jig down memory lane into a melancholic cadence. RIP PHC. And I look forward to the next hundred years of the ESU USA.

To conclude celebrations of its centennial, the English-Speaking Union in the United States–the headquarters is in New York City–invited stories from those of us who had been connected in some way to the organization. Apparently the narratives, photographs and videos will find their way into a digital time capsule. To languish or to live on? Who knows.