Monuments, Memorials And Me

The Mall was quiet earlyish that Sunday morning as I hoped it might be. Little traffic, few tourists, plenty of parking. The weather report had not been encouraging but rain held off, clouds suppressing the sun that would have made the humid air intolerable. Abraham Lincoln, sat dim, gray and pensive inside his shadowy monument. The Civil War dead live with him. 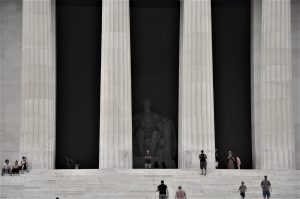 The War in Vietnam

We directed our steps first toward the Vietnam Veterans Memorial. My Dear One had never seen it. I had not paid it thoughtful attention since a bitterly cold March day in 1993. 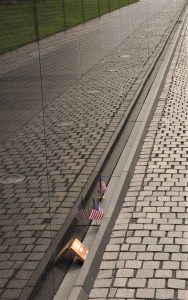 I remember the design competition in 1980-1981. The winning entry belonged to some graduate student at Yale named Maya Lin. The attacks on the design were vicious, calling it a “black gash of shame,” and the offense that the artist was Asian was palpable. Nothing would do for the most vocal critics but a heroic bronze representation of soldiers—male of course—who engaged in battle. They got that in a military trio by Frederick Hartt. The trees that shade them on their rise have grown and created a separate glade for them, making them less obtrusive. Now the soldiers seem to read the names etched in the Wall and remember a time before loss, before learning that this war was saving no one.

Almost invisible nearby is the Women’s Memorial. They were prohibited from combat, and even now are kept at a distance. Women in the military, however, were not disallowed from death. 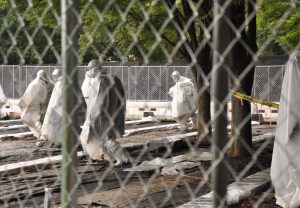 My Dear One retreated to the car and his book, and I continued on alone along the south side of the Reflecting Pool. The figures of the Korean Memorial appeared ghostly in their plastic shrouds. A fence surrounds them while the monument becomes a memorial bearing the names of lives lost. It sits somewhat off to the side, several lawns distant from the Reflecting Pool, in an area that seems less traveled. What do they call that conflict? “The Forgotten War”?

The World War II Memorial cruelly bisects the Mall at the western edge of the Washington Monument and breaks the mesmerizing axis from the Capitol to Lincoln behind his colonnade. The Peoples’ House used to look past the War for Independence to the bloody rift of the Civil War. That vista reminded us that A house divided against itself cannot stand and I cannot forget that The Big Lie would reduce the ideal of a more perfect union to rubble. Here, the peaceful space of the eastern end of the Mall, framed in museums, gives way to documentation of war. 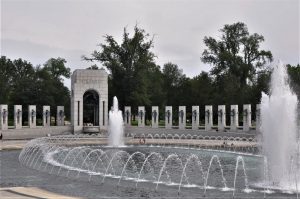 The World War II structures form an ellipse centered on an expansive pool and fountain. The Pacific Theater is on the north, the Atlantic Theater, on the south. The style is grandiose, classical in the Art Deco approach of the 1940s, faintly fascist in its immensity and self-conscious display of power. I met a couple, Debby and Chuck, who were creating a photocollage for their children of grandpa’s military history. Could I take some pictures of them? Of course. I was happy to photograph them smiling and pointing to the word “Guadalcanal” chiseled into the granite.

The loop past took me by the District of Columbia War Memorial for those residents who fought and died in World War I. It is a raggedy little thing. Intended originally to function also as a bandstand, it is really no more than a gazebo on the edge of the Mall, with raggedy landscaping and a forlorn aspect. In fact, a group was setting up for a musical performance as I passed by. A national World War I memorial is under construction in Pershing Park on Pennsylvania Avenue, adjacent to Freedom Plaza on the east and the monument to General William Tecumseh Sherman on the west, and kitty-corner to the White House. 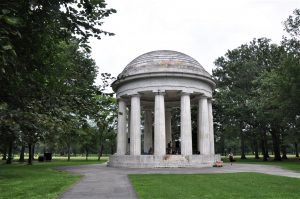 a bandstand by any other name

This war, the War To End All Wars, is all but forgotten. Yet it introduced modern technological warfare, chemical weapons and aerial bombardments to a world that was still largely horse-powered. The Treaty of Versailles that concluded this conflict set the ground for more than German aggression in the 1930s. In divvying up the Ottoman Empire to suit the imperial ambitions of France and Germany, it set the stage for the conflicts in the Middle East that consume us today.

I can only think that the wars waged by nations are fought by people. We call the men and women in our armed services “heroes” and we say “thank you for your service” when opportunity arises, but the blood that saturates those battlefields was shed also by the innocents called “collateral damage.” 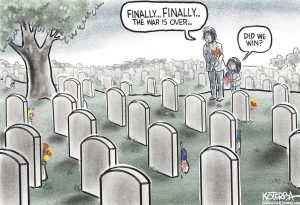 some of the cost

Words are cheap. So, in the long run, are these memorials. So much cheaper then providing our veterans with the lifetime of medical, psychological and economic care so many of them require. Much cheaper than caring for the orphans they left behind. Much cheaper than the wars we fight to “protect our national interests” when those interests are mainly the interests of politics and the businesses that profit from those politics.

Breaking news. Two suicide bombers and a number of gunman attacked the crowds outside Kabul Airport and at a nearby hotel. They are, apparently, members of the Islamic State Khorasan Province, ISKP (aka ISIS-K). These terrorists are purported to be the enemies of the Taliban, against whom we have have sacrificed so many lives and spent so much treasure over the past two decades. The body count includes fifteen American servicemen and sixty Afghanis. There are children among the dead. Can the costs do anything but mount?