The Hunt For Roe And The Collateral Damage

On November 10, 2016 the news announced that Donald Trump would be the 45th president of the United States. I lay in bed howling, “Fuck, fuck, fuck, fuck…” My Dear One tried to comfort me, saying that it would be all right.

I knew it wouldn’t be all right.

Today was the day that I knew with certainty would come if Trump were elected. And it has come.

Prior to the election I begged people to vote the Democratic slate in their state. It wasn’t that I wanted Hillary Clinton to be president, the first female president. No. I wanted to protect liberal centrism on the Supreme Court of the United States.

The Supreme Court of the United States of America

I knew when a balanced SCOTUS was doomed. It was the day Senate Majority Leader Mitch McConnell (R-KY) refused to allow President Barak Obama to nominate Merrick Garland.

The vacancy opened up in February 2017 with the death of Justice Antonin Scalia. That was eight months, three weeks and two days prior to the general election. McConnell claimed that Obama could not exercise his constitutionally mandated responsibility “so close” to the end of his term of office. It was necessary, he said, to let the people “choose.”

The Constitution, however, does not have voters elect the justices. According to Article II, section 2, a President “shall nominate, and by and with the Advice and Consent of the Senate, shall appoint … Judges of the Supreme Court…” Consequently the very conservative and formerly Roman Catholic Neil Gorsuch was Trump’s first appointment. Gorsuch went to great pains to obscure his intention to overturn Roe v. Wade, should the opportunity arise. 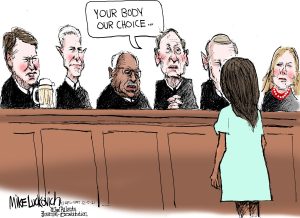 Then Justice Anthony Kennedy opted for retirement, despite apparent good health, abandoning his seat to his former law clerk Brett Kavanaugh, graduate of the Catholic Georgetown Prep School. Let’s not even get into the persuasive accusations of sexual assault that came with him. Like Gorsuch, he lied like a rug in claiming that Roe v. Wade was “established precedent.”

Justice Ruth Bader Ginsberg died on September 18, 2020, seven weeks and three days prior to the general election, and after early voting had begun. Unsurprisingly, McConnell had no problem with ramming the nomination of Amy Coney Barrett under those circumstances, the peoples wishes be damned. Oh yes, Barrett is Roman Catholic, born, bred and educated. In fact, she practices an extreme sect as a member of People of Praise, a secretive, charismatic Christian group. Barrett didn’t lie outright; her written record and public statements made that all but impossible.

The Constitution Under Assault

When Ketanj Brown Jackson is sworn in, preplacing Stephen Breyer, the Court will consist of six Catholics, two Protestants and one Jew. Of those Catholics, only Sonia Sotomayor is positioned left of center. The other two liberal justices will be a Jew (Elena Kagan) and Jackson, who identifies as a nondenominational Protestant. How appalling that the Black man who replaced Justice Thurgood Marshall, Clarence Thomas, seems hell bent on impeding the rights of people of color. How grotesque that the woman who was jammed into the seat ennobled by Ruth Bader Ginsberg would set the rights of women back at least to the 18th century.

Do that many Americans think an autocracy modeled on the ones in Russia, North Korea, Turkey, Hungary or China would offer us a better way of life? Which of those people would opt right now to forsake US citizenship and move to one of those countries?

As of May 2022, somewhere in the neighborhood of 64% of Americans wanted Roe left intact. If those 64% voted blue up and down the ballot in the next two primaries and next general election, there would be enough Democrats in office to secure a number of rights we take for granted: access to abortion and affordable birth control; fair access to the vote; the choice to marry the person one loves; the opportunity to foster and adopt some of the countless kids who need a home.

We the people, though, are lazy. We the people seem to have never learned that while we would like to be enthusiastic about the presidential candidate, it is the party platform that matters. We the people, at least we the people from the more liberal end of the spectrum, seem to have forgotten that we are voting to ensure that fair jurists, people of integrity able to leave ideology aside, find their way onto federal benches from the lowest circuit court to the highest court in the land.

We the progressives, liberals and reasonable centrists, at least, are lazy and forgetful.

Those red, ideological, MAGA-to-the-core folks have been working on this coup for at least seventy years. Now they are reaping the benefits.

Junior year in high school, I had Mr. Homan for European history. He was an economic historian, he told us, and we read the theorists whose ideas shaped and were shaped by the modern era. One of my favorite thinkers was Thomas Robert “Parson” Malthus (1766-1834). Malthus pondered the problem of poverty, particularly urban poverty, and came to the conclusion that what people needed to remain on an upwardly mobile economic track was birth control. He saw that among the impoverished and working poor–and even in the middle classes–financial stability was inevitably undermined by the birth of an additional child.

Today we have ample statistical evidence that children born to young, unmarried mothers struggle more in school. Their mothers often are undereducated and underemployed. Pregnancy also Imposes a plethora of social, psychological and physical traumas for which both mother and child—and society as a whole—pay a heavy price.

The reactionary SCOTUS 6 who signed the opinion penned by Justice Samuel Alito have thrust this country back not just to the 1950s, or even the 1850s, but something much more like the 1750s. Back then an enslaved Black human being was not only property but only three-fifths of a human being. We are returning to a time when women were chattel, sold by fathers into “advantageous” matches, and disallowed from owning property or having rights to their children.

It is a bad day for this country, A very, very bad day.