The Art Of Their Craft 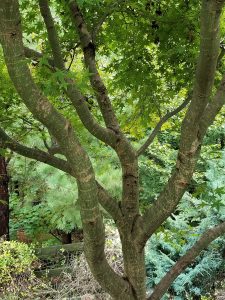 The tree guys—Clayton’s Tree Service–came by as scheduled. One dead green ash, one dying green ash, two non-fruiting persimmons and a cedar needed removal; the Japanese maple in the upper terrace garden needed a prune, pending my decision about eliminating it. When I bought it from a specialist in Japanese maples, I was under the (mis)apprehension that it would top out between three and six feet in height. It had managed to attain over twenty feet.

All of the trees represent errors in judgment. Immediately after learning that green ashes were native to this clime and happy growers, I bought a couple of saplings and dug them in. Within a week I learned the phrase “emerald ash borer.” The one I placed at the edge of the woods has been dead a couple of years now; the one in the terrace where the bulrushes grow is dying and sending up shoots everywhere in a desperate reach toward life.

The persimmons were such a disappointment. I knew it took two persimmons to tango, but fifteen years or so down the line we haven’t even had the seduction of flowers. As for the cedar down in the Lower Forty—it wasn’t especially attractive. Moreover, it was grabby as I dragged brush past it into the woods. Also Eastern red cedars (which are actually a species of juniper) are unhappy companions to crabapples. Cedar apple rust, a fungus, matures on the cedar and then devastates the crab. Two other crabapples have already given up the ghost; the survivor doesn’t look like it will be with us much longer.

Wednesday and Friday mornings are my prime gardening times. When dawn breaks cool, I braid my hair out of the way and dress in ragged tee shirt and socks, preparatory to hauling into overalls and work boots. This morning I knew the tree guys were coming so I settled to weed.

About six guys showed up around eleven with a battalion of heavy vehicles. Tim the Boss showed them the condemned trees. I wished them well and went in to clean up. In a of couple hours, they had chopped and chipped the trees, blown sawdust and detritus into the edge of the woods and were ready to go.

And I am so happy.

There are new vistas, down the hill and into the Lower Forty. Suddenly all the other trees look shapely in the brighter light.

And speaking of shapely: the Japanese maple I was all but ready to sacrifice to the saw looks now like a Japanese work of art. Branches hold foliage as a dancer of nihon-buyō  gestures with a fan. Be still my beating heart. Where formerly there was a dense overhang of leaves, denser and lower when it has rained, now there is an arch that frames space.

My tree guys really know their craft. And their art.