We have only a few days left before we must find our way to Aéroport Charles de Gaulle. The penultimate day of our travels, Friday, carries the magical numbers 11-11-11. At 11 o’clock I hope to be focused on that moment 93 years ago when the War to End All Wars ended. 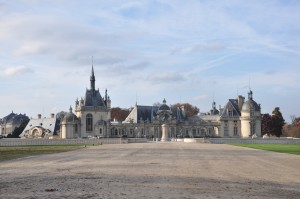 Today, however, I am distracted by the sunshine and wandering the jaw-dropping grandeur of the Château at Chantilly. This is the home of the ducs d’Aumale, heirs to the Orgemont (14-15th centuries), Montmorency (15-17th centuries) and Condé (17th-18th centuries) families and Bourbon royals. 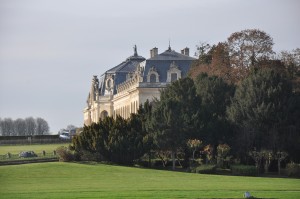 The Living Museum of the Horse, a hugely popular part of the estate, is closed, though, while repairs and conservation efforts are underway.  Rats!  The equestrian center is similar to the Spanish Riding School in Vienna in culture and theatricality. Seeing a performance would have been a thrill.

I am most disappointed, however, by not being able to enter the stables, the Grand Écuries. Their scale and magnificence nearly outstrips that of the adjacent château. Louis Henri, Duc de Bourbon and Prince de Condé, commissioned the architect Jean Aubert (c. 1670-1741) to build them in 1719.  Apparently his highness believed he would be reincarnated as a horse. (One wonders if the emperor Caligula, who made his horse a senator in Rome, might have been a distant relation.) The stables were intended to be a dwelling in the hereafter suitable to his social rank. The façade is 186 meters long and there is space—luxurious space—for 240 horses and 500 hounds. It is a beautiful building, an expression of the purest classicism, but its opulence makes the events of the French Revolution look almost inevitable.

bronze hounds at the gates

a boar in the woods

The collection is rich with portraits from the 15thcentury onwards, Dutch landscapes and French plein-air paintings of the Barbizon School.

The Duc d’Aumale became a soldier and had a distinguished military career in the region and became governor-general of Algeria. He also was forced into exile in England after the Revolution of 1848. He returned to France in 1871 during the Second Empire established by Napoleon III.  By then a widower whose sons had died, the Duke reconstructed the château to house his collections.  He bequeathed Chantilly to the Institute de France on the condition that the Musée Condé open its doors to the public, which it did on April 17, 1898. 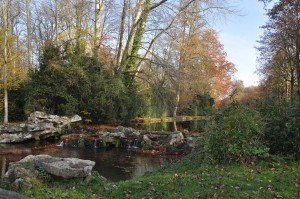 The grounds pulled us from the building; so golden a day is a rare thing in November. Swans glide in ponds and lagoons throughout the grounds. Geometric parterres contrast with picturesque “English” gardens. We strolled into the forest—a relatively youthful wood, but nonetheless beautiful. It was so quiet there. Few visitors come during this season and the museum rather than the gardens tends to be their focus. Warm light dappled the ground and smell of damp and dead leaves drifted in the air. The clop of hooves caught our attention and an Asian bride and groom came through in an elegant carriage pulled by a pair of handsome white horses. Was this simply a photo-op or a destination wedding? We never did see attendants or guests in party clothes.

On the website I found some bits of Chantilly trivia, movies filmed there and so on. My favorite  item was a quotation from former U.S. president, Richard M. Nixon: Why have I been seven times to Versailles and never here?

I’m with you on this one, Tricky Dick.  I think Chantilly has it all over Versailles. 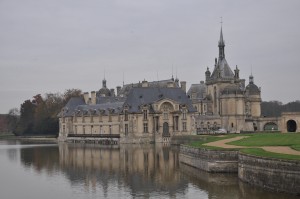 reflection of a fairy tale