WWI: In the Trenches

Nicole insisted we go to the church in Marbotte, a key stop on the Salient circuit, on our first full day, a Sunday. In 2002 we obeyed the emphatic directions of a desk clerk at the hotel in Arles, heading into the Camargue instead of driving to our planned destination of Aix-en-Provence to blissful results. This time we did the same. 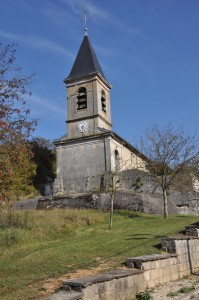 Marbotte is another tiny village hardly distinguishable from most of the tiny villages we drove through on the way here and will no doubt encounter on our routes elsewhere. The church—a masonry rectangle with a pointed spire—lacks any external feature that might capture the imagination.

It is, however, a special place.

We knew, for instance, that it survived four years of bombardments and in particular the deadly battles of 1914 and 1915 when the town around it was reduced to rubble. We knew that one window shines to this day, a relic of a far more ancient past and an emblem of survival. We did not know much else.

We climbed the stairs that lead to the entrance of this tiny church. A plaque to the left of the door leaves no uncertainty about the sacredness of this place:

Visitor
Whoever you are, remember this.
In this chapel,
thousands of corpses, pulled
from the lines, were, while awaiting
burial, laid on these pews
saturated with their blood.

We step into a narthex so tiny it is more of a vestibule. The walls are lined with names, memorials to the fallen, lists of names, plaques with the details of a particular son or husband

Inside the narrow nave, those ancient blood-soaked pews provide humble comfort to worshippers. Beautiful windows memorialize all the dead in 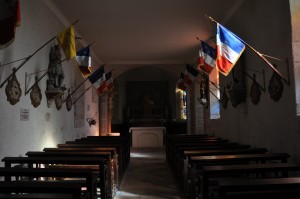 The pews of the dead.

their recognition of a single life. Regimental flags alternate with the Stations of the Cross. In this room where fifty faithful would constitute a standing-room only crowd, the souls of thousands of dead speak through eloquent silence.

Across the street, rows and columns of white crosses fill a green slope.  In the village center there is a museum, rooms on two floors filled with photographs, paintings, maps and relics, so many relics, the personal belongs of poilus, German soldiers, and even doughboys gone and forgotten. There are rooms of guns and swords and bayonets, spent shells and casings transformed into ornately decorated containers, medals, eyeglasses, canteens and rosaries. The displays are assembled with informed and thoughtful care, labels carefully composed and the whole organized by yellow shoeprints that lead the visitor from room to room and through each room in specific sequence.

The forests on the high ground obscure but do not eradicated the structures of war. Names take on a sacred cadence. 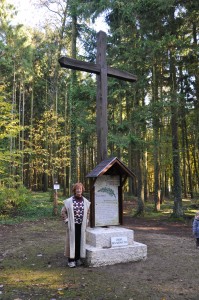 In the Bois Brûlé, French citizens built a redoubt from which they strafed the wagons bringing armaments and supplies along the Apremont Road to the invading Germans. The German army launched an attack, capturing the redoubt and leaving the ground wet with blood. A tall wooden cross marks the redoubt and stands between trenches hardly twenty yards apart from which enemies stared into each others’ eyes. It is said that a commander, Adjutant Péricard, rallied his surviving troops in April 1915 with the cry “Debout les morts!” (“To your feet, dead men!”)

There is a stone obelisk in the Bois d’Ailly dedicated by President Raymond Poincaré in 1923 to commemorate the terrible battles and devastating losses of the nation and people. A graveled rectangle at the base of the monument is a grave of unknowns; the remains, both French and German, lacked any means of identification. That makes the plaques 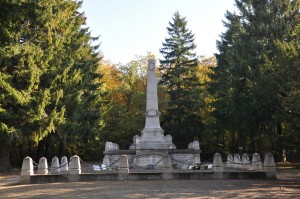 The obelisk at the Bois d'Ailly.

placed there all the more poignant, memorials from parents and wives and children who know their soldier died there, somewhere, but who never were allowed the grace of tending to a body. Maybe those names speak to a man interred there, perhaps not.

Beyond the monument is the Tranchée de la Soif, the Trench of Thirst. French soldiers fought there for three long days without food and without water before finally ceding the ground. In 1915, the Bois d’Ailly owned the sorrowful record of the most dead per square meter in the St. Mihiel Salient.

Interspersed with these memorials are places of equal meaning to the German people—trenches, hospitals and their own monuments. We heirs of the Allies easily forget that the descendents of too many German soldiers come here to mourn their own losses.

We are so aware of loss. Is there some way to focus on what we may have gained?