Frost was thick on the windshield of the rented Renault Scenic, the eight o’clock sky above Montsec palely blue, and sunshine reflected off the mist collected in the valley. Yesterday was long and mostly damp and gray until the fog burned off midafternoon. The flight from Philadelphia to Paris had been efficient but extremely uncomfortable. The space allotted us in the Airbus seemed less than ever before; arthritic hips ached and relaxation sufficient either for napping or reading was all but impossible.

Montsec is in Lorraine, about 16 kilometers from St. Mihiel, the town that gave its name to the bulge in the World War I Front that was the object of  four years of bloodshed and finally a massive battle on 12-13 September 1918. Rugged hills loom over valleys and lakes. German positions on the summits and slopes were all but impervious to assaults by the French for four years and the location enabled intelligence-gathering behind Allied lines that repeatedly undermined French efforts until American troops and firepower tipped the balance of power. The battle began here, in Montsec.

The village is a knot of three or four streets lined by mostly old houses, many of which have been converted from stables, 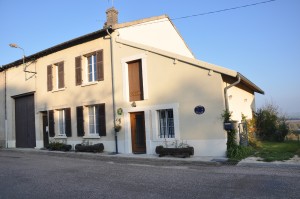 warehouses for Lorraine’s golden plum, the mirabelle, and distilleries that turned sweet fruit into eau de vie. The church sits a ways up the slope of a high butte, its bells gentle and pleading, and Montsec spills downward from it like tasks on the aproned lap of an industrious housewife.

Our gîte belongs to Nicole Laval, and before her to her father. She is a proud daughter of  Lorraine, devoted to the history of that place and especially to the monuments and memories of the Great War. I found out quickly during our correspondence over the rentals that her grandfather had been a poilu and I told her that both my grandfathers had been part of the effort, Pop as a volunteer ambulancier even before the United States entered the war, and David as an officer in the American Expeditionary Force. Nicole is passionate about the friendship between our countries and still feels gratitude toward the nation she believes saved hers. She was a child in Paris when the G.I.s liberated the city, and that has only tightened the bond. 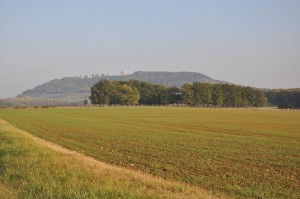 The American Memorial from a distance.

In the afternoon when the sun warmed the yellows and reds of October trees and brightened the green of pines and junipers, we drove the spiraling drive to the monument that crowns the butte. It was built by United States in the nineteen-thirties to commemorate the battles, the eventual victory and the terrible losses. Visible from almost every direction, its classical structure is like some Poussinesque vision in this rural place. We were not the only visitors: some older French couples climbed the gleaming steps and talked quietly and then a/ German family with three towheaded boys arrived. The children perched on the edge of the bronze relief map that sits below the oculus and chattered, pointing to this location and that. I took a few pictures but there were too many bodies to avoid and besides, it was obvious that the right moment would be early, early morning. 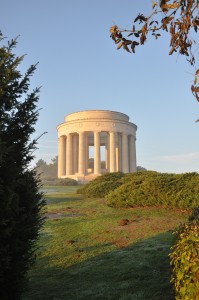 The monument in early morning.

Exhausted and twitchy from sleep deprivation and physical stress, we retired like kindergartners a little before eight. Around midnight, my inner clock still on Eastern Daylight Time, I awoke and lay for a while listening to the nocturnal restlessness of my Dear One.  A few hours later, weak sunlight in the skylight roused me; a vigorous teeth-scrubbing and warm shower scoured away the last discomforts of the voyage. I dressed, grabbed the camera, and returned to the butte.

The sun burned orange in the eastern sky and the wind coated my wet hair with ice. Mist lay in the valley below obscuring Lake Madine and its surrounding farmlands.  I was alone and it was silent except for the scolding of some invisible bird. I took photographs. I watched the sky deepen in hue and wisps of white cloud take form. As I returned to the car, a rooster’s greeting to the morning floated faintly up.

Back on the route d’Apremont I saw a bread truck coming down toward the fork. It turned a hairpin left, settling in behind me as I pulled up at number 9, our home for these few days. The truck also stopped and a cheery honk summoned the neighbors next door. I leapt from the car, grabbing my wallet, and snagged a baguette and a couple of chocolate éclairs. “Chaque jour?” I asked and pointed to my watch, whose hands marked 8:50. The freckled driver beamed and nodded, adding “sauf lundi,” her face positively angelic. I took my purchases and change and the truck moved a few feet and the driver summoned Nicole from her home next door.

So fresh bread, sweet pastries and savory pies come to your door every morning—except Mondays—a little before nine, and a toot of the horn lets you know she’s there. Fantastique!