As we approached Lithuania’s border with Poland and Belarus in the south, the tall pines exuded a primeval air despite their relative youth, and twisting roads offered glimpses of lakes and streams. In this countryside, gravity secures huge nests, some seeming to approach the scale of hot tubs, atop roofs, water towers, electrical poles and dead trees, any place offering a view, safety, and a fine breeze.

The white stork (Ciconia ciconia ciconia), gandras in Lithuanian, was made the national bird in 1973. This grand bird is said hereabouts to bring harmony to the family on whose roof they make a home. Lithuanians still tell their children that the stork brought them and on March 25, “Stork Day,” youngsters find gifts of candy, fruit, pencils and dyed eggs suspended from tree branches and fence posts. Other traditions apparently include the capture and killing of snakes whose remains are then buried beneath the doorstep, and the setting ablaze of bundles of straw.

This is all so very pagan. In Lithuania, however, the air and ground, the sun and waters, still speak to ancient gods unchallenged by Christian dogma until the end of the 14th century.

Until today, storks held dual citizenship in my mind, wintering in Egypt and summering in Scandinavia. Neither passport bore a Lithuanian stamp. Storks entered my imagination through a tale penned by Hans Christian Anderson (1805-1875). It was one of my most favorite stories, The Marsh King’s Daughter, and in it the narrator is a stork.

by the shores of Lake Metelys

This fable, complex and metaphysical, tells of a princess of Egypt and the Marsh King, a loathsome creature who drags the princess down into the mire as she searches for the swamp flower she believes will cure her ailing father. Their spawn comes into the world “in the cup of a water lily” and is adopted by a childless couple, the Viking and his wife. They name her Helga.

Helga is a terror. By day she is beautiful but wild and violent; at night she is transformed into a toad, “quiet and pathetic, with sorrowful eyes.” She grows into an infamous beauty who in her amphibious incarnation rescues a Christian whom her pagan father has jailed. She also sees this man martyred for his faith.

Helga’s conversion to Christianity and her new certainty of salvation offer her a truth. This truth is transformative and conjoins the physical beauty evident in her only in the light of day with the spiritual loveliness that shone only in the dark of night.

friends on the farm

Eventually—and storks play a part—Helga makes her way back to Egypt and to her royal privileges. On the night of her marriage, she has a vision of the Christian martyr and begs him to take her once more for a glimpse of the Kingdom of Heaven, a twinkling star. She thinks the flight takes but a moment. When she comes back, however, the castle is a strange place. Helga explains it all to a stork who tells her, “‘Why, that is a very old story that my great-great-grandmother told me… Truly, there once was a Princess in Egypt who came from the land of the Danes. But she disappeared on the night of her wedding, hundreds of years ago, and never was seen again. You may read about it yourself, there on the monument in the garden. Swans and storks are carved upon it, and at the top is your own figure, sculptured in white marble.’”

As the sun rises, Helga’s soul rises to God and her body dissipates into dust, leaving behind only the wilting form of a lotus flower.

When I was ten, the idea of moving outside of time and space thrilled me to the core. I thought maybe, if I could meet a stork, that some sort of magic would touch me as well. 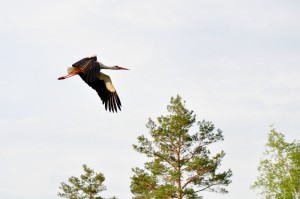