All I Want for Christmas

What, no peppermint stick ice cream? 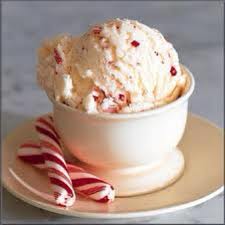 Is there something wrong with this place stuck just under the Mason-Dixon Line? My Dear One has been searching high and low and with no luck. There is none at Klein’s/Shop-Rite, none at Mars, none at Weis or Wal-Mart. We even tried Wegmans, hoping that their chi-chi reputation and up-scale clientele would work in our favor. No such luck.

How in H-E-double toothpicks is one to celebrate Christmas without a bowlful of creamy-cold peppermint stick ice cream studded with bits of chewy candy?

When I voiced my misery to the cashier at Wegmans in Abingdon, Maryland, she looked at me with Bambi-eyes wide in confusion: “What is it? I’ve never heard of it.” The cashier in the next aisle was similarly ignorant. But then, neither of them looks a day over nineteen. Another customer, a lady of dignified years, said she remembered it, but “not around here.”

Of course she’d remember it. When we were girls, it was everywhere. 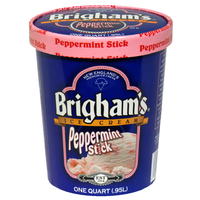 For my family it was the go-to flavor when we stopped at Howard Johnson’s because some of us were prone to car-sickness. It was hugely popular at Brigham’s in the Boston area, either as a cone covered with chocolate jimmies or in a sundae, swimming in a puddle of hot fudge sauce. Ah, Brigham’s. The other item on the menu that lingers in memory was the raspberry-lime rickey: a squirt of raspberry syrup, a squeeze of fresh lime, lots of seltzer water and a little ice. There was nothing better on a muggy summer’s day.

But that is for a summertime essay.

Christmas is hands-down my favorite time of the year, and not only because it is the lead-in to my birthday. (I was due, in fact, on December 25, but much to my father’s consternation and the detriment of our 1951 IRS return, I put off arrival for another ten days.) I love the smell of pine needles, the twinkle of lights on the tree, a mailbox full of cards, and a table draped in good linen and set with crystal and gleaming silver on Christmas Eve.

Many years we went caroling with the Girl Scout troop or a church group. I knew the obscure songs as well as the popular ones and could get through all of “Adeste Fideles” in Latin. Ma bought ribbon candy from the Charles Chips man so thin and brittle, it’d shatter with any but the lightest touch. My favorite flavor was vanilla—a rich, creamy, burnt-sugar kind of vanilla. I wasn’t much of an eggnog fan, but I loved that my parents popped a bottle of champagne with breakfast—how glamorous, I thought, and how extravagant. Later I realized that starting the day with a glass of bubbly was merely one of many strategies for coping with the day’s madness, but it is a fine tradition and one I have observed for the best part of four decades.

I don’t actually remember my mother serving peppermint stick ice cream at Christmas. I don’t even remember when I first served it for my own Christmas-Eve dessert. It is now, however, part of our ritual on December 24. My Dear One makes oyster stew and steams shrimp; my Tattooed Boy gets a steak and little green peas. The elders drink champagne and the lad has a bottle of sparkling cider. We finish with peppermint stick ice cream and Hazie’s Brownies (although I have put my own signature on Granny’s recipe). Sated and trying to postpone the washing-up, we tug on ribbons curled around the stems of our goblets and extract a goofy little something from the sleigh centerpiece. The sleigh gifts always concluded Nannie’s Christmas-Eve dinner; Ma inherited Nannie’s sleigh; I bought my own.

We are only hours from the Winter Solstice of 2012 and there is no peppermint stick ice cream in our freezer. My Tattooed Boy has promised to check the grocery store near his apartment and the Friendly’s in the Harford Mall, too. 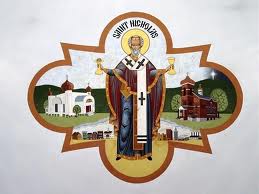 Please, dear Saint Nicholas, it is all I want for Christmas.