There was an interesting piece in The New York Times this morning. Under the headline “An Artwork Turns to Mush, All According to Plan,” William Grimes described sculptor James Grashow’s desire to be the “architect” of his own work’s demise. In December 2006, Grashow’s recently deceased dealer Allan Stone received a couple of elements from a papier-mâché installation by the artist that had been on long-term loan to SUNY-Purchase. Stone had no room inside the house for the sculptures and had secured them “like hostages” to an oak tree on the lawn. The elements had predictable effect and the works were irreparably damaged. 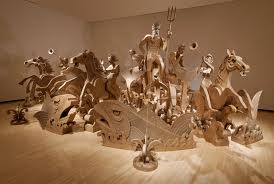 Grashow fumed and from his mutterings came this epiphany, as recounted by Mr. Grimes:

All art decays. Why not embark on a grand work that admits its own mortality, that embraces its own  destruction? The ignominious end of his papier-mâché figures was, Mr. Grashow decided, a blessing. “I was liberated, in a way, to be the architect of what was inevitable, anyway…” 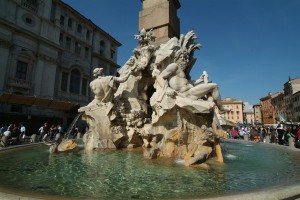 Grashow now works in corrugated cardboard. His large and complex sculpture “Corrugated Fountain” (2011-12), a work inspired by and based on the art of Baroque master Gian’Lorenzo Bernini (1598-1680). After indoor exhibitions in Virginia, Manhattan and Pittsburgh, “Corrugated Fountain” was place on a terrace outside the Aldrich Contemporary Art Museum in Ridgefield, Connecticut, and over a period of six weeks collapsed into the afore-mentioned “mush”—and that was Grashow’s intention all along. The soggy corpse was hauled away in a dumpster. I wonder if it was recycled or dumped in a landfill?

I don’t challenge Grashow’s choice of medium. I love his accessible style, use of color (even when the color is the tan of cardboard) and his witty and appreciative invocations of the Old Masters and times gone by. I certainly find a place in my heart as well as my convictions for the temporary installation, the ephemeral experience, the conceptual rather than the material. In the end I find delight and poetry in this wonderful creation.

This article simply poked at a place in my soul that is already bruised.

I cannot get over the fact that I don’t want art to turn to mush, at least not in so brief a time frame and certainly not as a matter of general expectation. I want art to last for centuries, even millennia, to be the nexus of cultures, eras and ideals. I want art to offer that aspect of immortality that is at its core optimistic in the presumption of a future, the survival and thriving of humankind, of hearts and minds that believe in Art as something fundamentally good, precious, and spiritual.

I rarely feel touched by art that is only—or mainly—a transient entertainment, an expression of cynicism or an assertion of entropy. We seek through science to vanquish death and extend life indefinitely. Why would we not want art that could match our own lifespans?

I am dismayed by the specter of art composed from the black cloud of nihilism and depression.

I don’t want art that is suicidal and I am distressed by the trend of art toward artist-assisted suicide.