What I Don’t Realize That My Students Don’t Know

Since the class of 2002, Beloit College has published an annual “Mindset List,” a statement of cultural milestones and realities that current college freshman may or may not know or share. Needless to say, it is a list that makes my Baby-Boomer’s heart clank like a junkyard jalopy.

Here are a few items that caught my eye. 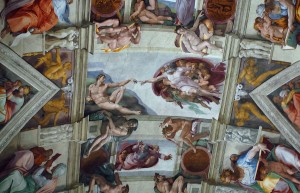 A glance at the Sistine Chapel ceiling

I teach art history, though, and here is what I found for the class of 2016: “the Sistine Chapel ceiling has always been brighter and cleaner.” I think the author of the list means “bright and clean.” For the class of 2016, the vivid colors and crisp contours have ever been thus.

I have been thinking about these things because my most recent group of “Modernism and Beyond” students bombed on the second quiz. That quiz has always been a problem, but there has been no shift in course content or pedagogy that could account for the uniformly bad performance.

That means the culprit is me.

I went through the exam and listened carefully to what they said about questions, about slides, about everything. And what I heard was this: they do not recognize objects, images, representations and symbols that I assumed they could recognize and the “modernism” in the course title has become a remote period that has no ascertainable connection to the time in which they live.

I, of course, a child of the sixties, am firmly embedded in this time frame. Until 1997, I could tell my students about Jeanne Calment, a little old lady living in Arles, France, who sold colored pencils to Vincent van Gogh when she was a girl of 13.

Jeanne Calment on her 122nd Birthday

Okay, she didn’t like him. But the point was that she knew him, not merely that she was alive when he died, but that she had an organized memory of him and her interactions with him.

This was much less than “six degrees of separation” to me—year after year as Calment celebrated her 110th then 115th, and finally her 122nd birthday, I silently wished her many happy returns. I knew I could reach across space and clasp her hand; time was no barrier. Van Gogh, who died in 1890, was but two degrees separated from me. How much closer then was Claude Monet, who died in 1926, or Edouard Vuillard who died in 1940, or Henri Matisse who died in 1954 when I was two years and ten months old? Pablo Picasso’s death in 1973 was one of those “where were you when you heard [whoever] had died” moments. There have been many, many such moments for me since.

But back to teaching.

When I discuss the artist Marcel Duchamp (1887-1968), I focus on the idea of the “readymade,” an industrially fabricated item designated as art object and which represents, in Duchamp’s words, “nothing by the wish of the brain that conceived it.” He took a snow shovel and titled it “In Advance of a Broken Arm” (1915), a wood-and-metal coatrack and called it “Trap” or “Trebuchet” (1917). Then there was the infamous “Fountain” (1917), a urinal rotated ninety degrees so that it could sit on a pedestal. These objects were challenging but manageable.

Of course it did. My students and even their parents are unfamiliar with glass bottles and especially glass bottles washed, upended and left to dry so that they could be reused. The rack itself resembles a work of welded-metal sculpture. The abstracting effects of the black-and-white photograph, in which the object is isolated on a white background, makes its identity even more mysterious.

The idea of the “readymade,” moreover, is infinitely more complex now than it was a century ago, and, oh my stars, the readymade just celebrated its hundredth birthday. The banality of factory objects, the primacy of function over design, is a concept of the Industrial Age that began in the 19th century. Movements from Arts and Crafts and Art Nouveau in the 1890s to Russian Constructivism in the 1920s sought to conjoin aesthetics and design with manufacturing in one way or another. The Bauhaus in Germany raised that interest to an ethos.

Today what my kids know in terms of inexpensive and mass-produced is Michael Graves and Isaac Mizrahi for Target, Vera Wang for Kohl’s and Wal-Mart’s knock-offs produced under its “Mainstays” and “Faded Glory” brands. Let us not forget, in particular, that bastion of cheap chic, Ikea. The equation of the mass-produced with the humdrum, crass and ugly does not compute for them.

I think what happened this spring was that we passed a critical point on the timeline.

My Millennials were born around 1993 or 1994. They started consciously looking at art, for the most part, well past the beginning of the 21st century and the 20th century is a period of remote history, the era of their grandparents, a curious time to which they have no particular connection. Modernism, in this post-postmodern age, is no more immediate and relevant than is the sculpture of Phidias in 5th-century BCE Greece or Carolingian manuscripts of the early 9th century; it is no more accessible than the frescoes done by Masaccio in Florence in the 1420s or Bernini’s Baroque sculpture or Baron Haussmann’s vast urban renewal project in Paris in the 1850s and 1860s.

“Modernism and Beyond,” a requirement for all undergraduates at my college, is a requirement intended to familiarize them with the art that shaped the art of their time.

How should I teach Modern Art now that it is no longer the art shaping the art of their time? After all, these are kids who think Michelangelo’s paintings on the Sistine Chapel Ceiling have always been bright, colorful, and clean as morning air after a rain shower.