Down to New England 6: A Darning Surprise

I just wasn’t expecting it.

We were on the lower level of the Yale University Art Gallery, down among the American decorative arts, just poking about, trying to see a few more things on our way out of the building and out of New Haven. As we veered from a period room into a rather dim hallway, there it was: a sampler just like mine by Mary Budd and it was embroidered with the same word: “Weston.” 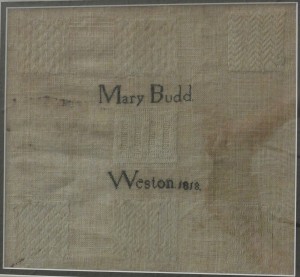 The “Mary Budd” as it was always known passed down from my mother’s mother, Nannie, to her and thence to me. Who was Mary Budd? No one seemed to be quite sure, but a few years ago I figured it out. She was my third great-grandmother on Nannie’s maternal side, not quite the mitochondrial DNA line, but not far distant. No one seemed to think much of this little bit of monochromatic abstraction exactly one hundred years older than Kasimir Malevich’s famed Suprematist work, White on White (1918). I loved its simplicity and wondered about “Weston.” Weston, Massachusetts? Seemed unlikely. Mary Budd was born in Philadelphia and lived most of her life in New York State, ultimately, as the wife of William Bones, in Staten Island. 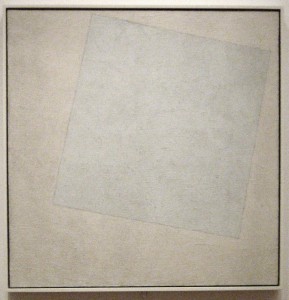 I peered at the label on the Yale sampler: “Sarah Pugh, American, maker (1801-1884) / Westtown School, American, founded 1799 / Quaker darning sample, Chester County, Pennsylvania.” “Not “Weston” but “Westtown.” My Dear One said, “I know where that is,” and it turns out to be in the general vicinity of his old stomping grounds.

My curiosity about the “Mary Budd” had to be shelved while we continued our circuit through Maine and Massachusetts, but once home I turned to Google. Under “History” on the Westtown School website was “Archives;” under “Archives” was “Collections;” and under “Collections” was “Samplers.” I scanned the text and a familiar name jumped out: “Rebecca Budd entered Westtown as a student in 1799 at age 20 and was soon promoted to teacher. This sampler stitched by her in 1801 contains monochromatic half medallions, a center cartouche, and floral patterns, all reminiscent of Ackworth samplers.”

I sent off an email and was delighted with the quick response. Archivist Mary Brooks told me this about my great-great-great-grandmother: “Mary Budd was female student #1588, admitted in December 1817 at age 13. Her place of residence was Philadelphia and her father, Joseph, was deceased; her account is in the name of John Conard. Mary Budd left school in June 1819.” She also said, “The sampler you have is known as a darning sampler, a very utilitarian needlework exercise. A darning sampler gave girls practice in invisible mending by stitching those various patterns which mimic different weaves of fabrics.”

I checked my own information. Yes, Joseph Budd died in 1807. “John Conard” was Uncle John, her mother Priscilla’s brother.

I had another question. The dates for Rebecca Budd did not match the Rebecca Budd who was Mary Budd’s half-sister. Turns out two Rebeccas attended Westtown, entering in 1799. Rebecca-the-sister-of-Mary stayed until February 1802. The other Rebecca, she of the lovely sampler mentioned on the website, was Mary’s and Rebecca’s cousin, the daughter of Joseph’s brother, Stacy.

And that would have been that, at least for a while, until another coincidence. I was enjoying lunch at MICA with Josh and Emma Jo, the valiant TARCs (Teaching Assistant/Resident Counselor) who assist in my Pre-College art history workshop and crack the whip during studio (assignment) time at night. For some reason, I don’t remember what, I mentioned I had attended boarding school.

“I went to Westtown School near Philadelphia,” he replied.

I stared at him, jaw hanging down. “No!” I exclaimed—and recounted the tale above.

Time to get back to research. I’m wondering just how far back my Conard and Budd ancestors go with the Westtown School.