In Flanders’ Cities 2: The Kitchen

I do not understand why one wouldn’t want to cook while on vacation. Everything tastes better in Europe. The eggs are eggier, the butter more buttery and the vegetables, breads and meats so much more dense with flavor.

There is a shop a few meters off St. Catherine Place that has a magnificent display of mushrooms in the window. Eryngii, pieds blue, morels and varieties we might even find at the Wegmans in Bel Air. The lure was irresistible. We returned to the neighborhood to search for a wine shop, get bread at the Boulangerie Charli and cheese at the store whose name I don’t recollect (with the fellow whose nephew plays soccer with the University of California-Santa Clara), and revisit the store with the mushrooms. The proprietor was charming and we bought four eryngii—“Slice them thinly” he reminded us—and headed for home.

“P. eryngii is the largest species in the oyster mushroom genus, Pleurotus, which also contains the oyster mushroom Pleurotus ostreatus. It has a thick, meaty white stem and a small tan cap (in young specimens). Its natural range extends from the Atlantic Ocean through the Mediterranean Basin and Central Europe into Western Asia and India.”

According to me they are delicious. I can hardly describe them. Sweet rather than earthy. Nutty rather than earthy. As the main course with a Bibb lettuce and homemade vinaigrette they were marvelous. As a side with lamb chops bought at the Halal butcher just around the corner (down rue Potagère, right on Philomène, left on rue des Coteaux aka Wijnheuvelenstraat) just as good. I sautéed the chops and made a sauce from shallot and a splash of red wine—and a swirl of butter of course. Spectacular.

The best wine so far is Mas des Chimères (2013), which the label identifies as from Octon, France. The shape of the bottle suggests that it is a burgundy. Wikipedia, the traveler’s friend and the world’s great threat to factual accuracy, however, places the vineyard in the Languedoc-Roussillon region. Don’t care. It was excellent, affordable at a little over €10 ($11) and I have another bottle. Picked up a €5 bottle of Côtes du Rhone at the Carréfours mini-mart at Botanique (metro and tram stop). The Mas wins the taste test hands down, is definitely worth the extra €5, but y’know, the plonk wasn’t half bad. 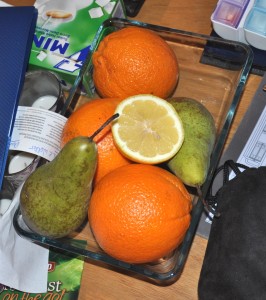 Breakfast can be anything, but scrambled eggs, crusty bread and butter, half a blood orange and an espresso or milky tea do just fine. Sometimes a little jam goes on the bread, too. One morning my Dear One enjoyed a few thin slices of the Jesus sausage. But the eggs, with their orange yolks and sturdy shells are something quite different from what we get at the supermarket back home.

When will the pears be ripe, though? Maybe tonight. Yes, definitely tonight. And I bought a lemon to make sauce for the chicken and a big bunch of some kind of greens. I don’t think we will starve.