The forecast was splendid: sunny at 71 degrees, which is to say 22 degrees Celsius. We would be outdoors all day. We dressed accordingly, climbed on a train and got to Bruges by about 11:00.

The walk to the Grote Markt, the center of town, is less than two kilometers, two incredibly pleasant and beautiful kilometers. We (and by that I mean “I”) misread the map and added a slight detour by circumventing Minnewater Park to the south and approaching the Powder Tower, that ancient storehouse of explosives, from the east. From there it was a gentle stroll past the Beguinage, home of countless generations of saintly women.

As one approaches the ancient town center, the insistent cry for tourist dollars, euros, yen and other currency crescendos. Vendors of souvenirs fill the store fronts. Horses clop across the pavers, drawing carriages filled with visitors. The experience offers one aspect of Bruges. Canal boats offer another and we learned that only the five canal-boat tour companies may ply the waters and only at specified seasons and intervals. Many homes have gardens that lead onto canals—and no boats for them. It is not permitted. 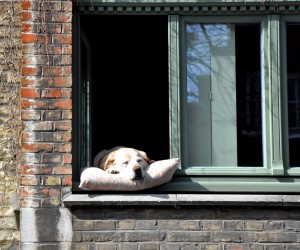 We did see Fidel, the famed yellow lab of Bruges who rests on a pillow in an open window and whose cameo in the thriller “In Bruges” made him an international celebrity. I asked about the problem of climate change and rising waters and was told that as yet Bruges is protected by the locks that manage the canals; Bruges is not Venice.

It has been said by a travel expert, one “RS” whose style and commentary I find utterly noxious, that the time to enjoy Bruges is after 5:00 when all the tourists leave. At the risk of suggesting he might be right about anything, he’s right about this. The shift in energy and sound as the clocks strike is both palpable and audible.

But let’s get on to what matters: the art. Oh. My. Heavens. The Sint-Jans Hospital and Hans Memling. The Church of Our Lady and Michelangelo’s Bruges Madonna. The Groeninge Museum and Jan van Eyck, Roger van der Weyden and Gerard David. My jaw still drags on the ground. Get the museum pass and get to every museum. (We got the pass and did what we could that afternoon. Clearly a proper visit to Bruges involves at least two nights and two-and-a-half days. We didn’t get to the Lace Museum, to the Stadhuis, or the Gruuthuis Museum. We didn’t (and by that I mean “I”) climb the Belfort tower. The list is long and we were not there nearly long enough.

through a doorway and invisible from the street

Bruges is not unlike Florence, a town that has preserved its treasures not exactly for the purpose of tourism but in a devil’s bargain with tourism. One can only be grateful, though, for that preservation. Seeing works in Bruges’ sacred precincts, enjoying the intimacy and quiet—at least in early April—of the transformed spaces and modest galleries that match the scale of the town; these are incomparable joys.

In the morning it was misty and serene. By noon the streets were congested and bustling. Then at five, that curious emptying took place and the sounds of Dutch and French replaced the babble of tongues. By six or so it was all we could do to drag our aching feet back to the train station and a couple of seats on which we could rest on our return to Brussels.

We enjoyed our brunch-time omelet at the Carpe Diem Café, Wijngaardstraat 8, an early supper at Huyze Desmet at Sint-Amandstraat 8, and ice cream at Da Vinci Gelateria on Geldmuntstraat 34. Next time we will stay a night or two and see if the darkness welcomes back the Middle Ages.