I was here in the summer of 1970, an eighteen-year-old hitchhiking around Europe after a year on an English-Speaking Union scholarship at Princess Helena College in Hertfordshire, England. My traveling companion, Sue, was a school pal of a school pal, and we joined forces on this adventure—and an adventure it was. But I remember nearly nothing about Antwerp itself. I do remember that we went to tour a diamond-cutting establishment and that I began to think that diamonds—at least good ones—had a certain attractiveness. I also remember that the hostel where we stayed had bunkbeds with lacy coverlets and deep comfortable bolsters. I fell asleep early and in the morning Sue told me I looked like a corpse laid out for vieweing: flat on my back, hands crossed on my chest.

My only goal was to visit the Rubens House—all else, I decided would be gravy. It turned out to be a day like a soup bowl filled with utterly succulent dinner and brimming over with gravy. 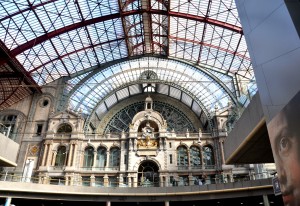 The view on arrival at Antwerp’s Centrale

From the utterly majestic train station—wonderfully modern on the interior and filled with escalators that are so much fun that they should be in an amusement park—my Dear One and I strolled the Meir toward the Old Center. The Meir is possibly the most attractive shopping boulevard anywhere: It’s largely pedestrianized—except for bicycles—and all manner of stores, boutiques, cafés and restaurants fill the ground level of three- and four-level buildings. Most façades of those buildings are the ornate architecture of the 18th and 19th century, offering endless variety, endless interest. 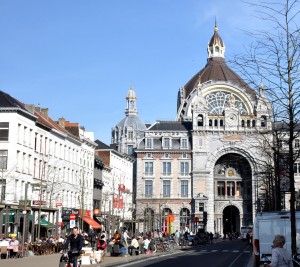 Centrale from the Meir

My art-historical reeducation continued all day. The Rubens House—which has the world’s slowest ticket line, by the way although the payment line at the Panos in Brussels Airport is a close second—is proof positive that nothing succeeds like success. This home, with its warren of rooms, enormous studio spaces, and spacious courtyard with beautiful garden seems to answer the question, “Was Rubens a good artist?” Well, if the trappings of financial success are evidence of anything, this piece of real estate says Peter Paul Rubens was a humdinger.

Belgium is filled with Rubens’ canvases but he was also a designer and something of an architect. What knocked me out, though, was his conceptual brilliance and originality. Again, my education informs me of his gift for languages, his intellectual accomplishments, his social connections and position as something of a diplomatic liaison. It is, however, his personal connection to his subjects that I begin to understand. His ardor as a husband, his demonstrative affection for his children and brothers, his sense of moral justice and his spirituality.

All this is the cumulative effect of seeing scores of works—the real works—in so short a period of time, and seeing the great altarpieces—above all Antwerp’s Raising of the Cross, The Deposition, and The Assumption of the Virgin, in places they were meant to be seen: in the soaring spaces of churches, in the raking light from clerestory windows, feeling the chill of ancient stone and still air that raises goosebumps. Or is all that simply the sensation of awe?

And who knew Antwerp was as much an intersection of global life as the Café de la Paix in Paris, King’s Road in London, or Times Square in New York City? We searched until we found the small restaurant t’Hofke at the end of a twisting alley off the Oude Koornmarkt. Guests sat at only a couple of tables and the absolute calm and quiet of the place made even one as noisy as I retreat to my tiniest indoor voice. The American couple nearby were finishing up, paying their bill. We nodded, smiled, made light conversation. They were from Old Lyme, Connecticut. Oh, might they know my cousin? Why yes, of course they did and worked closely on a board of a cultural institution. And, by the way, we had another acquaintance in common, the former director of the selfsame cultural institution. We exchanged business cards and they left, all of us delighted by the serendipity of if all. 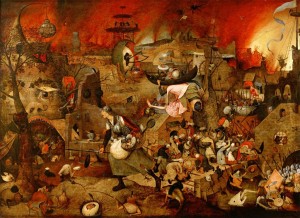 Nearly out of time—the museums all seem to close at 5:00, excuse me, 17:00—we scooted to the Mayer van den Bergh Museum and made our final half-hour count. The founder, born Fritz Mayer, opted out of the family business and a career in the diplomatic service to collect art and he did so with gusto. Around 1898 his interest shifted to medieval work and Flemish “primitives”;  he soon refined his focus and acquired the most famed works in the collection, notably those by Breugel. (The greatest of these, certainly the most popular, is Dulle Griet or “Mad Meg.”) Mayer van den Bergh died from injuries sustained in a horseback riding accident in 1901 at the age of forty-three. His mother, Henriette, transformed the collection into the museum that now belongs to Antwerp, building a dedicated museum building in the neo-Gothic style next to their home and opening the collection to the public in 1904. Fritz was very close to his mom; upon his elevation to the nobility in 1887, he had added her family name, van den Bergh, to his. Henriette oversaw the museum until her own death in 1920. This collection has the individuality and idiosyncrasy of great private collections assembled by individuals who followed their hearts: the Isabella Stewart Gardner Museum in Boston, Massachusetts; Sir John Soane’s Museum in London; the Barnes Foundation in Philadelphia, Pennsylvania.

Antwerp, by the way, produces the best map and the best city guide I have found anywhere, ever. The guide divides all Antwerp, rather like Gaul, into parts (although more than three). Each area includes a walkabout from that includes the most interesting places and attractions—interest being determined by native Antwerpers. Get the map, get the city guide and get walking.

And maybe stay longer than a day. Next time I’ll be here for a least a week.