Most of us choose what to remember. We cherish feelings illuminated through rose-colored glasses and forget the uncomfortable; sometimes we nurse the grievances and grudges that give us our sense of self. In any case, the content and color of the past, the limning of our history is largely up to us.

In Lithuania, memory has a somewhat different substance. In this land where culture and ethnicity was methodically suppressed, perhaps as early as the 15th century with the dominance of both Roman and Orthodox Christianity over the indigenous spirits of the earth, air and water, memory can be a dogged, pugilistic, and secretive thing, sometimes the only possession left when all else has been stripped away.

I feel this in ways large and small.

memorials on the Hill of Crosses

There is the Hill of Crosses (Kryžių kalnas) in the countryside about twelve kilometers north of Šiauliai. In the rolling fields just off the Riga Highway, amid the Kulpė River and its tributaries, a saddle-shaped mound is planted with innumerable crosses, some plain and tiny, others immense and elaborate, and ornamented with carved figures. Everything is draped in smaller crosses, rosaries, other mementos, evidence of repeated visits, repeated gifts to whomever is not to be forgotten. Wooden steps allow an easy ascent and then lead downward to a path toward a modern church—I think it is—in the distance. Dirt paths curve around the sides of the hill like the folds in a human brain.

The first crosses may have been placed here by the survivors of the rebels killed in the 1831 rebellion against the Russian Tsar; their near-and-dear were not permitted to pay tribute to the dead at cemeteries. More crosses appeared after the rebellion of 1863. It was said by some that the Madonna and Infant Jesus appeared sometime in the 1850s or 1860s at this place and further encouraged people to place crosses here. According to the official website, there were seventeen crosses in 1850, one-hundred and eighty by 1898, and over four hundred in 1938. During the period of Soviet occupation, 1940 to 1991, the number grew exponentially; in 1960, twenty-five hundred crosses, just crosses, were counted.

The Soviets liked the memorials no more than the Tsar had. Pilgrimages, religious services, feasts were all regarded as counter-revolutionary and a challenge to Soviet totalitarianism. The “demolition period” began in 1958 when the collective farm Meškuičiai began digging gravel on the hill. As the website relates:

In 1961, the hill was surrounded by bulldozers. Wooden crosses were damaged or burnt, metal crosses were taken to the scrap
dump, and stone and concrete crosses were smashed, buried or thrown into Kulpė Stream. Every year the authorities destroyed 500 crosses under the excuse that they were only taking away the crosses ‘of no artistic value’… [Claiming] a swine-fever and rabies ‘epidemic,’ it was forbidden to enter the territory. The road to the hill was even guarded by police.

At the end of the 1980s, when Lithuanian nationalist fervor was at a fever pitch and the push for independence had become an inexorable force, the Soviets built a weir on the Kulpė, which already was inundated with sewage, in an effort to flood the hill. Neither floods nor bulldozers—four separate efforts were made to raze the mound—succeeded. New crosses appeared nightly. The Hill of Crosses as a place was then—and is still—as immortal as Lithuanian memory.

Modern museums seem possessed of the same spirit, the same project of historical, personal, and spiritual reclamation. Certainly that is the case in Vilnius, Lithuania’s modern capital.

The National Museum – Palace of the Grand Dukes of Lithuania says “The Past Opens up to the Future:”

The complex was intended to be complete and open to the public in 2009, the year of Lithuania’s millennial celebration. (The country was first identified in an entry for 9 March 1009 in the Annals of Quedlingburg: “The Holy Bruno, who has the byname Boniface, archbishop and monk, in the eleventh year of his conversion, in the border area of Russia and Lithuania, was killed by pagans and, together with his eighteen followers, strove to heaven on the seventh Ides of March.”) It took a little longer to get the museum fully set up and archeology, scholarship, displays and interpretation are all ongoing projects.

The Upper Castle towers, if you will pardon the pun, above Vilnius; the name commemoratesGediminas (c.1275 – December 1341), Grand Duke of Lithuania from 1315/1316 until his death, and founder of the nation which under him spread from the Baltic Sea to the Black Sea. The remains of a great wall and fortifications rest on the summit. The city spreads out, neighborhoods seamed together by the Vilnia and Neris Rivers, studded with emerald parks and the towers and domes of churches. It is a patchwork of ages, of worn and tattered rubble, elegant squares lined with neoclassical buildings, and precincts filled with gleaming skyscrapers. But all these areas share a certain family resemblance; whatever their differences and squabbles, they unite to face whatever affront may be offered.

When sunshine finally pulled us all outside after days of sleeting rain, I climbed the winding cobblestone road up toward Gediminas’ Tower. The grounds of the Upper Castle rest atop steep grassy hillsides pocked with tree stumps. In the tower a spiral stair, wooden steps and brass balustrades bring one up to the first level where a model of the original castle is the main display. Up, up another level and there are photographs around the walls, showing the Castle grounds from about 1890 to the late twentieth century. A video reviews Lithuanian history and recalls the Baltic Way, a chain of approximately two million people, hands joined, forming a human chain running 675.5 kilometers (419.7 miles) across the Baltic States from Vilnius in Lithuania, through Latvia to Riga, Estonia. A wall map is eloquent testimony to what that meant in will and organization. 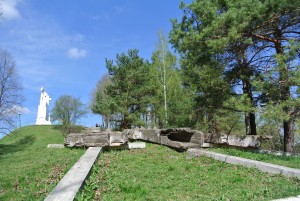 The Three Crosses and the ruins of what went before

But there is yet another level, roof space that offers a 360-degree view of Vilnius. To the southeast is the Hill of Three Crosses (Trys kryžiai) in Kalnai Park. The wooden crosses that marked the spot since the 17th century collapsed in 1869 and Tsarist governors disallowed them to be rebuilt. In 1916, the Polish-Lithuanian architect and sculptor Antoni Wiwulski (1877–1919) recreated them in stone; those crosses were torn down in 1950 per order of Soviet authorities. A white-painted concrete monument was was erected on the same spot in 1989 and fragments of Wiwulski’s work lie on the slope below.

Almost 180 degrees opposite to the northwest is the far more utilitarian television tower. The tallest structure in Lithuania, it belongs to the SC Lithuanian Radio and Television Centre (AB Lietuvos radijo ir televizijos centras). In March, 1990, Lithuania declared its independence from Moscow. On 13 January 1991, fourteen unarmed civilians lost their lives and at least seven hundred people were injured when Soviet troops continued their assault on Vilnius by seizing the tower. A referendum on independence on February 9, 1991 was overwhelmingly approved; 84.73% of registered voters cast a ballot and 90.47% of those ballots were in favor of full and total independence. There is a small museum dedicated to the battle on the ground floor and traditional wood carvings outside that commemorate the deaths of the thirteen men and one woman, Lithuanian citizens, who died while trying to maintain the blockade against Soviet troops. They are all buried in Antakalnis Cemetery (Antakalnio kapinės) the place that also serves as a military cemetery. The memorial, which sets on a hillside, is austere but beautiful with tombs arranged in an arc, a metaphoric embrace of the visitor who enters that space.

Memorial to the Victims of the January Events

Not as visible from the top of Gediminas’ Tower are the KGB Museum /Museum of Genocide Victims (Genocido aukų muziejus) and the Tolerance Center of the Vilna Gaon Jewish State Museum. Both attest to horrors and heroism. Both demand that eyes, hearts and minds remain open and attentive and that the human lives lost and culture sacrificed are not forgotten, that the truth of that evil be preserved, unfaded, undiminished.

Memory, here of all places, is determined to survive.