Our grill is no less used that the stove. It produces a perfect roast chicken and keeps the smell of onions out of the house. When red peppers are cheap, we blister a few dozen over the flame and freeze them in olive oil for whenever we need them. And, of course, it does an admirable job with slabs of meat and the usual barbecue suspects. In fact, whatever the food, we at least consider using the grill.

While fire professionals prefer not to see grills on decks and generally want them positioned some distance from the dwelling, our sits a few feet from the vinyl-siding-clad wall, just the other side of the glass sliders that separate the kitchen from the family room. The deck is about ten feet above the ground; below it is a stone patio and terraced gardens that are meant to moderate the descent of the steep hillside that lands up in the woods, a designated “non-tidal wetland” that is right now, on the last day of the wettest June on record in Maryland, a swamp. 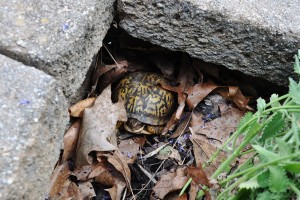 Tintoretto under the catmint

The woodland is home to creatures of every kind: about a dozen or so deer, a den of foxes, a raccoon, a woodchuck, snakes and turtles, frogs and toads, and countless birds. In fact, our corner of suburbia offers critters the best of both worlds, wild and developed: habitats wet and dry, a variety of micro-climates, things that bloom, things that fruit, and a smörgåsbord of gifts from humans, from ornamental landscaping plants to garbage. 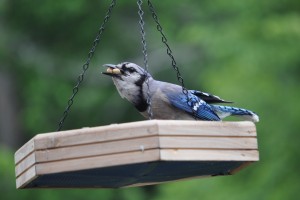 The critters are friends we know by name. There’s Sid Vicious, the black racer snake (Coluber constrictor) who enjoys the warmth of the driveway and garage, and Tintoretto the box turtle (Terrapene Carolina) who fancies the corner under the catmint once the province of our late lamented feline, Theodora Maud. Various woodpeckers including the Bobs (Downys), the Poilus (Hairys) and the Claytons (Redbellies) visit our feeders alongside the cardinals Richelieu and Johns and Hopkins the blue jays. Francis/Frances the fox and Rocky the raccoon occasionally show themselves as well.

Our gray treefrog (Hyla versicolor) is Vince. That’s a convenient form of “Invincible” because no matter what indignity we inflict on him, he survives and carries on. 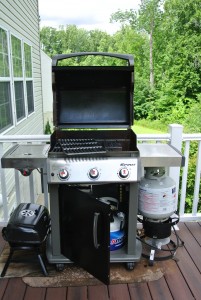 Vince’s preferred perch is atop the propane tank hand wheel inside compartment at the bottom of the grill. He’s been knocked around, stepped on, and squashed yet he is a fellow of phlegmatic temperament and takes it all in stride. Or in squat. Squatting is what he seems to do most of the time. 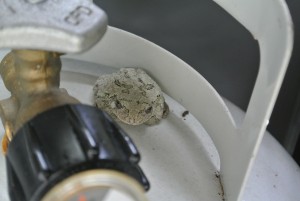 Vince where he lives

Vince is clearly finding plenty of insects and small invertebrates—although we have no idea what those may be. He leaves monstrous poops behind—squishy brown turds we thought they were the product of much larger creatures, at least the size of squirrels, with an anus large enough to accommodate BMs a third as big as the pooper himself.

I still don’t get why he wants to hang out in the grill. I understand that there are lots of bugs in the vicinity. But isn’t it hot and oppressive inside the grill? Don’t our constant assaults on his privacy and person bother him? Wouldn’t he be comfier, cooler and better camouflaged in one of the countless trees that spring from the soggy ground of our non-tidal wetland? Aren’t there more “insects and small invertebrates” down there than up on the deck?

But then, we are a friendly and welcoming household. Maybe Vince just likes us.