The Mouth That Would Be President

I can’t get him off my mind.

Normally I spend precisely none of my time thinking about him, watching his television shows or envying him his wealth.

He’s bumptious and loud, though, someone more skilled in getting attention than a spoiled toddler in a toy store and the media keep ratcheting up the volume.

I have started paying attention. He maligned Mexicans saying, “…they’re bringing drugs, they’re bringing crime. They’re rapists.” He denied the extraordinary valor John McCain demonstrated as a solider and a prisoner of war and then finally conceded that McCain is a “war hero because he was captured.” Then, of course, there was the Megyn Kelly brouhaha. 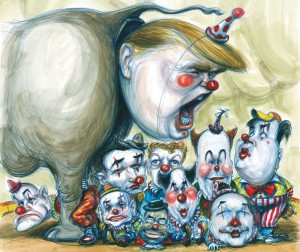 I watched the Republicans’ first so-called debate. Or as much as I could stomach of attacks on women’s reproductive rights, attacks on working people, attacks on education, about an hour and a quarter. The glee with which the professional pols targeted the most bigoted, angriest and most hate-fueled sector of the listeners was genuinely frightening. He, however, the archetype of self-interested, self-serving and self-absorbed Big Business was frightening on a whole other level.

I listened to his hyperbole, his sweeping generalities and unsubstantiated rhetoric. I listened to him claim intellectual brilliance, business acumen, political savvy, virtues of every kind and quality right down to good looks. I also listened to him insult everyone, individually, personally and gratuitously. Since then he has responded, as is his wont, to any comment other than expressions of toadying adulation with a verbal assault. Every comment, whatever the subject, includes a parenthetical observation that promotes his own exceptionalism while denigrating whatever subject, nation, culture or individual is the focus of the discussion.

But here is the weird thing.

That man sounds just like someone I know. I will call our acquaintance B.

B is a person I fundamentally feel sorry for. He embarked on a career in film, creating ads, doing government projects, and ultimately working in Hollywood. He married a couple of times, is estranged from his children and has consistently failed to hold up his end in a series of affairs. I hoped that a recent relationship might come to something but his partner’s daughter died tragically in an accident and after that, there didn’t seem to be any stick left in the glue.

When my brother asked how he might recognize B, B said he’d be “the biggest guy in the room.” My brother is taller than B. B collected Japanese Ukiyo-e prints and raced cars but it was not possible to discuss those things because his insights and experiences “trumped” whatever anyone else had to offer. His stories were about himself and his accomplishments; such stories invariably disparaged the other players. B seemed to believe that he alone was right; all others were part of some conspiracy—knowingly or unknowingly—intended to do him, B, harm.

We have not spoken since the ugly aftermath of his stepdaughter’s death. We have, with considerable sorrow, packed up our memories of B and consigned them to a place where they feel less painful. We understand that B is a clinical narcissist, a troubled man with mental issues, with irretrievably damaged family relationships and anger problems exacerbated by the steroids and human growth hormone he was importing illegally from China in his pursuit of eternal youth. As we looked back on a long friendship—one that went back almost sixty years before I met B myself, we recognized weaknesses, fissures in his emotional and psychological foundations.

This is one reason why I cannot stop thinking about that man who believes he will be the president.

His drive to make money is relentless. He uses his wealth to collect young and sexually alluring women, to exploit laws that turn bankruptcy and its destructive wake into a means of accumulating greater wealth. Now he has positioned himself at the center of political debates he is patently unqualified to join in.

I am no Republican, it is true. I come from a line of dyed-in-the-wool, knee-jerk, bleeding-heart, Kennedy-loving liberal Democrats. I am not, however, indulging the easy enmity of partisan politics.

The ugly clamor that has emerged from the Reactionary Right, the hatred and violence and selfishness and ugliness that seems to consume social, political and even personal discourse these days, terrifies me. That man has eliminated—by the pure force of depraved ego—any semblance of rational conversation about the issues that face us now and in the foreseeable future. His stokes firestorms with fuel that survives even as the flames destroy all else in their path.

He claims the moral high ground of honesty unobscured by “political correctness.” His “honesty,” however, does not present any kind of truth informed by thoughtful study, reliable data and expert advice. He has all the data and expertise he needs because his “truth” is only personal opinion. As with a religious fanatic, his “truth” is a set of some deity’s revelations. In this case, though, the deity he worships is himself. His disdain for “political correctness” permits speech that is vulgar, rude, humiliating, and hurtful, all the more so because it expresses only personal beliefs tarted up as “truth.”

Imagining him as President of the United States is a little like imagining B in charge of my life.

There are enough voters who self-identify as Republicans, though, to lend him and his opinions oppressive weight. They think he’s simply the cat’s meow, the bee’s knees, the best thing since sliced bread and the messiah who will lead the United States back to some condition of global grandeur, might and wealth that this nation apparently has lost.

Mike Taibbi in the August 12 issue of Rolling Stone said this: “It’s Western civilization’s very own car wreck. Even if you don’t want to watch it, you will. It’s that awesome of a spectacle.”

That is really what I can’t get off my mind.