The Mouth That Would Be President: It Has Been Elected President and I Am Sick

When I went to bed, North Carolina had already fallen and I knew the nightmare was about to descend.

When I awoke, I watched the numbers on my clock flip toward 6:15 when the radio would click on with the news on WYPR. And it did. And three or four words in, I heard the words “Trump’s victory speech” and I said, “Fuck.” 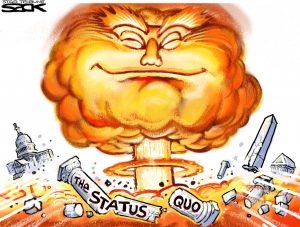 And My Dear One stroked my arm and murmured, “It will be okay.”

Racism has carried this semiliterate, racist, bully of a moron-who-would-be-der Führer to the doors of the White House. Men, particularly white men, have found a way to get all those uppity, “nasty women” back under their dirty, misogynistic thumbs. People of color, immigrants, Muslims, individuals who identify as L, G, B, T or Q, people who believe in science and facts, all decent people are looking at four years of such murky, befouled darkness that one can only reach into fiction, to characters such as Sauron and Voldemort, to find a metaphor.

Because surely this is fiction. Surely this is just a novel that is almost at an end after more than a year of unspeakable ugliness.

And the people that enabled this nightmare?

Those “Progressives” who found themselves more committed to their visceral dislike of Hillary Clinton than they are to human rights, protection of the environment, a balanced Supreme Court? Fuck’em. They screwed this country to the wall because they were more about their temper tantrums and taking down the candidate who would have been a decent and honorable president than they were about walking the higher moral ground they claimed as their own. They were more about punishing Hillary Clinton than preserving our country. 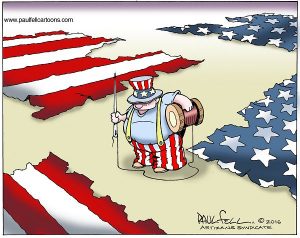 Those educated Republicans who have reason to know better? Whose children, siblings or friends are LGBTQ? Whose religion preaches love and tolerance? Whose social and economic privilege should be the source of gratitude every day and instill in them a dedication to philanthropy? Fuck them too. Racist, ignorant, misogynistic yahoos I get. I don’t like them and I do my best to ignore them and protect the vulnerable from them. But people who should know better? People who will put party loyalty ahead of everything from human decency to national well-being? For a party that has descended from honorable and thoughtful conservatism to a tar pit of reactionary troglodytes? Fuck them twice.

The current count shows that Hillary Clinton has moved ahead in the popular vote. It’s 2000 again and the Republicans have figured out how to make that very un-American minority control the lives and futures of those who genuinely believe in the rights articulated in the Constitution and the hopeful idealism of all the founding documents. It is time to get rid of the Electoral College.

I said this scenario was something I truly feared. I said it when Trump began his campaign. I said it louder after the first Republican “debate.” I have not stopped saying it since. 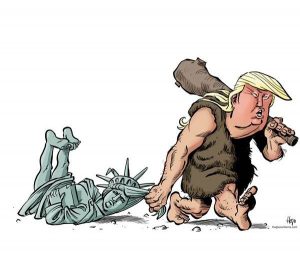 I try to suppress those what-ifs: What if Joe Biden had decided to enter the primary and had won? What if Bernie Sanders had prevailed in the primary? What if Clinton had chosen a different running mate? What if James Comey had followed protocol and instructions from the Department of Justice and not implied more untruths about Clinton in the closing hours of the election? What if we hadn’t had an African-American in office for the last eight years, an educated, accomplished, honorable African-American with a great marriage and lovely children, to fire up the racist masses?

What if. What if America was really the great country filled with mostly wonderful people I always thought it was.