The Mouth That Would Be President, Take 2

It was August 13, 2015, exactly six months and twenty-one days ago as I write this, that I published my anxiety about the campaign of Donald J. Trump for the Republican nomination for President of the United States of America. 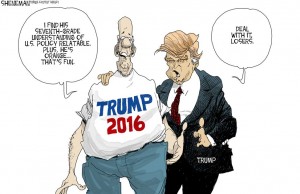 I was told not to worry, that he was a farce, that his campaign would self-destruct. Trump was not a serious candidate.

The campaign has not self-destructed. Trump is a serious threat as a candidate.

A week earlier had been the first Republican “debate” and Trump’s main attack focused on Fox News’ Megyn Kelly. From there his campaign became a Twitterverse of insults intended to humiliate and degrade. The more perverse and appalling his bullying, the more intense the gravitational pull that attached to his brand racists, homophobes, xenophobes, misogynists, semi-literate and bone-ignorant extremists who normally in the fetid societies of hate.

It all culminated in the most recent encounter, ironically the rematch of Trump and Kelly, when Trump raised Marco Rubio’s taunt about small hands being indicative of unnamed but obvious masculine deficiencies but suggesting that his genital size was, like everything else about him and his actions, big. “I guarantee you there’s no problem,” Trump said. “I guarantee.” 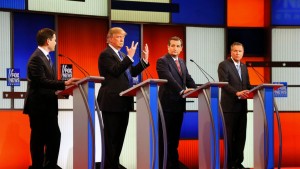 Republican Debate: “Mine is Bigger than Yours”

In fact, all we are hearing from any of the candidates—and that includes Bernie Sanders and Hillary Clinton as well as the quadriga hauling the GOP toward annihilation—are assertions that thus-and-such will happen BECAUSE THEY SAY SO.

The worst of it is that an appalling number of American voters believe that a candidate’s statement is both truth and prediction founded on logic and incontrovertible evidence.

There is, however, no evidence supporting any assertion by any candidate. The claims, promises and prognostications are largely nets of words intended to ensnare the hopeful, the gullible, and the stupid. Candidates cannot say what will be only what may be given the unpredictable impulses of Congress and the wanton disregard of so many members for the Constitution and laws of this nation. (Do I hear echoes of Scrooge’s fearful question to the Ghost of Christmas future about the nature of those shadows he was shown?) 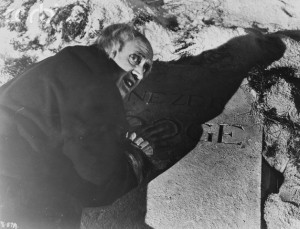 Scrooge learns what MAY become.

A childhood friend and I had a lively discussion about this yesterday afternoon as we chatted on the phone about the impending end of Downton Abbey. I opined that the problem with this country is that a frightening percentage of Americans are uneducated morons who threaten the very future of this nation. (She was kinder in her view than I, but then I have always been James Madison to her Thomas Jefferson.)

She saw the uproar as a continuation of a class rebellion against the monarchy, with King George III being reconfigured as the US Congress. I see it as an expansion of crass anti-intellectualism and the rapacious greed that sought to exterminate the tribes that occupied the continent when Europeans arrived. Trump-eteers express the same mentality as the authors of the Constitution who ruled that for purposes of the census a black person equaled three-fifths of a human being; and that when enslaved had not even three-fifths the rights of any free individual. It is part of a widespread disavowal of what it means to be American when being American involves inconvenience, empathy, generosity or anything counter to short-term self-interest.

In the end we agreed that this country has, among other things, failed miserably when it comes to teaching the facts of our history.

What will happen on Tuesday, November 8? We will elect the 45th president of the United States. When that happens, there will be a tsunami of misery from the losing side, screams about perversions of the voting process, and a Congress that reconvenes in which approximately half the members will battle to contain and subvert, and otherwise declare war on the agenda that person lays out. The idea that these politicians have been elected to work together, friend with friend, foe with foe, to support the Constitution and serve and protect the United States of America will be far from their minds as they pursue whatever agenda and initiatives to which they’ve committed. 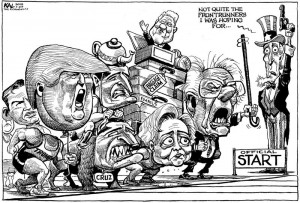 I hope like hell that the 45th president will be a Democrat. I hope this lest we give access to the nuclear button to a bloviating bully who thinks governance is about making deals that only involve winners and losers; lest the Supreme Court be front loaded with jurists who believe in a medieval golden age when law was enacted and dispensed by religious authority and women were chattel belonging to their fathers until they were sold to husbands; lest the very idea of empirical science be vacated in schools, in matters of social and environmental policy.

Most of all I hope that the 45th president be a Democrat, lest our country return to a Jim Crow culture of inequality and oppression; lest we deprive women of the control over their own bodies they suffered and struggled to obtain; lest we reject forever a future holding out the hope that, despite all else, lies at the heart of American ideals.

Does this mean the Democrats will give me my heart’s desire—or even an approximation of what I want? No.

It only means that the specter of a Republican victory, however that victory is parsed, scares the living daylights out of me.