Reading Unfriendly: My Barnes & Noble Is Freaking Me Out

Went to my local Barnes & Noble to pick up a couple copies of Dan Lyons, Disrupted: My Misadventure in the Start-Up Bubble (Hachette, 2016).  I had heard most of the interview he did with Terry Gross on NPR’s “Fresh Air” and immediately got the book. Just finished it. It’s not only a great read, it’s a must read for anyone trying to find a way to cope with age bias, the digital age and/or the stock market. 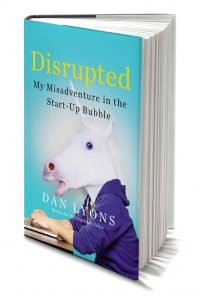 But this isn’t a book review. Just go read the book. Buy it and get this guy on the best-seller lists. He deserves it.

So many bricks-and-mortar bookstores with built shelves filled with bound books with paper pages have been razed by the economic wrecking ball of Amazon. Even the large chains—Borders, Brentano’s, B. Dalton, Waldenbooks—have disappeared. Wikipedia offers a “list of bookstore chains” worldwide. Under “United States” there are two categories: “current” and “defunct.” Barnes & Noble is hanging in there under “current,” possibly because they have largely taken over the college bookstore function. The others are long gone.

I understand the work of market forces. I appreciate the singular achievement of independent sellers who see their work as a moral calling and largely a barely-for-profit enterprise. When I find such a store, I spend money. Just because. And there is always a book that needs to be on my shelf.

So today I dodged into the Bel Air B&N to snag a couple copies of Disrupted (one for a Father’s Day gift for our son-in-law, the other for My Brother The Attorney). I looked through the tables of recent releases. Not there. I scanned the one rack of “Best-Selling Nonfiction.” Apparently it isn’t (yet) a best-seller. I walked toward the back of the store where nonfiction is stowed in dark corners and realized that yet more square footage had been given up to games and children’s amusements.

I glanced left. That’s the travel section. To the right is history. I spend enough time in both locations to know that’s not where I should be looking. And what category of book is Disrupted anyway? It’s memoir. It’s humor. It’s a bunch of things nonfiction.

So I asked the clerk at the information desk. The disruption in the store drove the title Disrupted out of my increasingly porous brain. Erupted? Dislocated? I asked the clerk to look up the new book by Dan Lyons.

It was listed. And on what shelf, pray tell, might the book be found?

“Oh, that’s in “Business Profiles,” she said. At least I think that’s what she said. She led me to an area that I couldn’t for the life of me imagine anyone ever “browsing.” There were four copies of the book wedged between heaven knows what. Despite memorable jacket art that includes a startled unicorn, a laptop and a blue hoodie, the copies were all but invisible in marketing terms.  This despite the fact that the author is also a writer on the popular HBO series Silicon Valley (in its third season) and that the subject is current, controversial and attractive to diverse tastes. I took two and headed to the registers.

I asked the cashier, a pleasant woman with almost as much gray hair as I have, whatever happened to the cases that used to be labeled “Staff Favorites” and “Recent Nonfiction”? They are gone. She thought maybe there was a “Staff Favorites” area on the website. No, there isn’t. And on the website, “favorites” is only a sales metric not an endorsement. I suggested B&N consider a category called “Books recommended by local customers who spend way too much money here.” She laughed. I’d give such a category serious attention myself.

I went to the website to see if I could find Disrupted by “browsing.” “This Week’s Biggest Books”? Nope. I was, however, pleased to see that Beyond the Ice Limit by Douglas Preston and Lincoln Child made the cut. (Buy that one too. Cousin Doug is a fine writer. Linc also.) “B&N Reads.” Uh-uh. “Business.” Not there, and I scrolled all the way to the bottom of the page. “Business Biography.” Way too much Donald Trump but not a hint of Dan Lyons.

So exactly how might I discover this book by browsing the website? I wouldn’t. Websites are for searching, not for browsing.

Bookstores with shelves and books—stores which essentially emulate libraries—are where I can discover books I want to read or that I might want to give as a gift.

It makes me simply nuts that the only bookstore within a forty-minute drive of my home is becoming reading unfriendly.