As I write this, Donald John Trump has been President of the United States for 161 days—not quite 24 weeks.

He has been, as he tweets it, “modern-day presidential.” I can’t even begin to parse that; obviously such presidential qualities as dignity, humanity and patriotism are utterly unknown to this Know-Nothing Nativist and portly, “short-fingered vulgarian.” 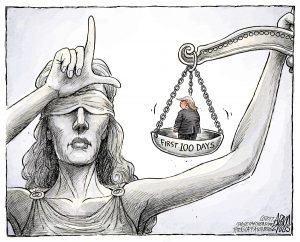 Boss Tweet masturbates with social media, reminding responsible reporters that “I’m president and you’re not.” He’s neurotically fixated on his Electoral College victory, preferring to spend taxpayer dollars on proving that it was only millions of illegal votes that denied him the popular vote as well. That he lost the popular vote to Clinton by 2.10% or about three milion votes is well documented. It was a year of record-low turnout—about 55.4% of eligible voters actually cast a vote. So while Clinton enjoyed a significant margin in the popular vote, we also need to remember that Trump’s supporters constitute about 25.5% of the electorate.

Trump claims that he requires Twitter to communicate with the American people without the intervention and subversion of the “Fake News.” He is really saying, however, that he requires the roar of approval he gets from his core supporters, the crowd demonized in an act of political clumsiness by Hillary Clinton as “deplorables.” (Trump’s people had their “Deplora-Ball” on January 20; some of the rest of us collect tee-shirts and mugs proclaiming “Nasty Woman” and “She Persisted.”)

The other day over a lunch that is all too infrequent two friends and I talked about everything that had transpired since November 8, 2016. On November 9, I was at MG’s home; we had scheduled a date for lunch and a video about an artist we both admire but jettisoned that pleasure when I arrived in tears. I had listened to Clinton’s concession speech on the drive over and was sick with grief; MG was dazed and disoriented.

In the winter, she and her husband had gone to Arizona as they always do. On January 21, 2017, I along with so many pussy-hatted women, their children, and the men in their lives, found my way to Washington DC for the Women’s March. MG wanted to hear about that. 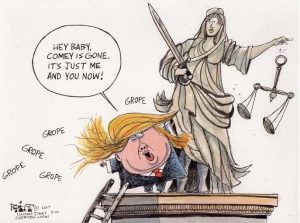 I told her about the ashes-of-roses pink cap crocheted and express-mailed to me by a high-school classmate who lives in Cleveland. I shivered at the memory of that cold, damp weather and sat straighter with pride as I recalled the ideals and sense of hope and yes, anger, which had brought us together in such solidarity.

How was it, we continued to wonder, that so many decent, worthy people had voted for this behemoth of brutality, ignorance, narcissism and arrested adolescence? When people claimed that he was a “successful businessman” and that that was what the country needed in the Oval Office, did they not grasp that his “success” at business was more a matter of the advantages of family wealth and a father who buffered the blows of bad judgment? Trump’s success was built on small business and large corporate partners he stiffed. The image he crafted as a reality-television celebrity was truthful only it that it megaphoned his schadenfreude in his gleeful pronouncement, “You’re fired.”

As president he has obsessed over reports in the “Fake News” mainstream media and lashed out at critics in the most puerile language. He lies—constantly, reflexively, stupidly—and his enablers in his Cabinet and in Congress advance those lies knowing that they are lies. Trump has behaved boorishly with leaders of other nations and his birdbrain policies and diplomacy have moved this country and the world closer to environmental death and a nuclear holocaust. Yet along with his deplorables (yes, I think it’s a fair description of many), people who in the past demonstrated respectable ethics and human decency continue to applaud him.

the long and short of it

And that brings me ambagiously to my discomfort at reconnecting with an old friend from the 1970s.  CM and I bonded over our shared dislike of an art history professor at University of Massachusetts-Amherst. CM, her husband and three children lived with a golden retriever named Flash Golden and a cat named Nantucket. Her best story—and it is still one of the most hilarious in my repertoire—is about waking late one Saturday morning to discover her eighteen-month-old playing with her pocketbook having unloaded most of the contents of his diaper into it.

In 2015, I typed her name into a couple of searches and came up with a hit on Facebook that seemed right. Left a message. Didn’t hear back until a couple months ago.

We exclaimed with pleasure about the reconnection and exchanged information. Even had a wonderful telephone call.

Something she said, however, about the state of affairs in the United States, dinged my alarm bell. Then the posts appeared on FB. Vociferous posts, mostly slamming the Obama administration and several praising Trump. 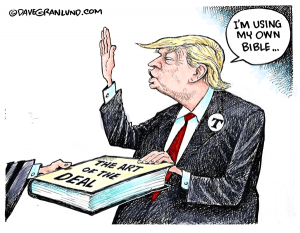 What happened? How am I to reconcile the sweet, easy-going, hoot-and-a-half woman I knew back in the 1970s with a person who actively supports the president I despise and promotes sentiments in her FB feed that are borderline hate speech? That was not the CM that I remember. That does not appear to be the CM adored by her many FB Friends.

I just don’t understand how truly good people can promote the hate-filled agenda the President shares with the GOP. I don’t understand how people who are not rich would push for legislation that will make them poorer and degrade their lives while making rich people richer and strengthening the barrier that wealth constructs between people of privilege and reality as it exists in the rest of the world.

I don’t understand any of this because truly good people know the difference between good and evil.