The Mouth In The Oval Office: One Year Down 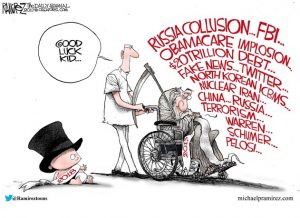 The news media—certainly the “fake news” media from which I get most of my information—are weighty with analysis this morning, the Sunday morning of New Year’s Eve 2017. Trump has been president of the United States of America for just under twelve months. On every day since 20 January 2017 I have gone to sleep anguished over what he and his GOP conspirators have done to this nation and its people and I have woken up fearful of what they did while I slept and what they would do until I returned to the arms of Hypnos.

There are the global affronts: withdrawing from the Paris Climate Accords; demeaning, disparaging and generally misrepresenting our allies, especially in Europe; the game of nuclear chicken, along with name-calling and taunts exchanged with Kim Jong-Un of North Korea; and the inexplicable Bromance with our established enemy President Vladimir Putin of Russia.

There are the assaults on decency that began early in the election process. Trump leveled and defended insults aimed at war heroes like Senator John McCain and Gold Star parents like Kizr and Ghazala Khan. He described white supremacists and those who commit acts of racist terrorism “very fine people,” recanting his apparently forced statement to CNN that the acts of such individuals were “repugnant.” He turned a ceremony honoring Navajo Code Talkers of World War II into an opportunity to attack Senator Elizabeth Warren as “Pocahontas,” destroying the dignity of the moment owed to all Native Peoples and simultaneously denigrating the remarkable life of the woman Matoaka better known by the name Trump uses to convey scorn. As the year draws to a close, roughly half the island of Puerto Rico is still without power since Hurricane Maria struck at the end of September. Trump has by turns ignored the plight of these American citizens, maligned them as unwilling to do anything for themselves, criticized the island for throwing the FEMA budget “out of whack” and claimed that that the storm was “not a real catastrophe” having left an insufficiently large number of corpses in its wake.

Most of all, however, is the harm wreaked by Trump, his appointees and his congressional minions on this nation, physically, morally and emotionally.

In terms of Cabinet and government appointees, his officials are dedicated to destroying the departments they are intended to manage and protect. Many Secretaries, from Benjamin Carson at HUD and Rex Tillerson at State have no experience and little understanding of their job descriptions. Others, like Betsy DeVos at Education and Rick Perry at Energy would do away with the departments entirely. DeVos believes that education should be for profit and subservient to Christian fundamentalist beliefs. During the 2011 Republican presidential primary, Perry said he would entirely eliminate three departments from government: Commerce, Education, and oops! Something else. Oh yeah. Energy.

Ryan Zinke as Secretary of Interior and Scott Pruitt as head of the Environmental Protection Agency are busy rolling back protections on air and water and shrinking protected public lands so that they can be opened to exploitation by their cronies. Those restrictions and regulations they are so proud to be rolling back? Ask the citizens of Flint, Michigan, what they think about the importance of safe drinking water. Ask people living downwind of factories whether they are okay with a dose of poisonous byproducts in each breath they take.

The moral compromise of American ideals is real.

Attorney General Jefferson Beauregard Sessions III is in charge of the fair and uniform enforcement of laws of the nation. He was denied a federal judgeship in 1986 because of clearly racist beliefs and statements such as the one where he said that a white civil rights lawyer was a “disgrace to his race.” When asked at his confirmation hearings for the position of USAG, he denied ever being rejected for a federal appointment, a lie he later had to recant.

When Sessions abandoned his seat as Senator for the state of Alabama to become Attorney General, Trump promoted the candidacy of the Republican, Roy Moore. Moore has been twice removed from the Alabama Supreme Court for refusing to uphold the law. He has been credibly accused of child molestation and sexual misconduct by at least eight women. But then the man in the Oval Office lionized by so many has been credibly accused of sexual misconduct by twenty-one women, including his former wife Ivana Trump, and recorded bragging about this behavior.

Meanwhile Congress has rammed through “tax reform” that will make the extremely rich extremely much richer, larger corporations even more powerful, and the deficit explosively larger. Working people and the middle class will start paying the cost in about five years and our children, especially the children of the poor, working people and the middle class will continue paying the cost, as will their children generations down.

The emotional toll on this nation as a community is immeasurable. 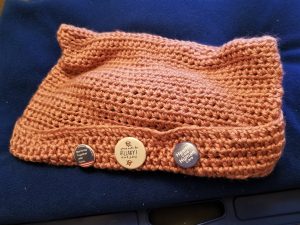 Political disagreements between family members and neighbors have become gulfs of hostility and acrimony. Trump widens those chasms with his relentless attack on any disagreement or criticism as “fake news.” He labels the legitimate press as “the enemy of the people” and elevates the fawning sycophants at alt-right websites and extreme-right sources like Fox News and the stations belonging to the Sinclair Group. His methods bring to mind the monstrous dictators of recent history: Adolf Hitler, Benito Mussolini, Generalissimo Francisco Franco, Joseph Stalin. We appear headed for a modern Inquisition, an updated McCarthyism.

I don’t feel good about 2018. I know, however, that in a few days, one Senate seat from Alabama goes blue. Arizona and Nevada could too, but there are nine Democrats who are vulnerable in the same election. The gerrymandering that colors the Electoral College bright red, moreover, suppresses Democrats in House races, state legislatures, county and city councils and school boards.

Trump is the nightmare I feared in 2015. He has become a round-the-clock terror.