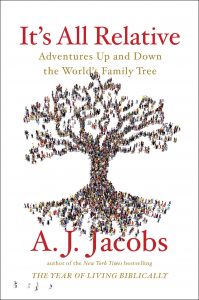 I decided a few days ago that I would record every book I finished reading in 2018 and say something about each. As it turns out, this book, It’s All Relative: Adventures Up and Down the World’s Family Tree by A.J. Jacobs (Simon & Schuster, 2017), a Christmas gift from My Dear One, went faster than I anticipated, largely because I spent most of this past Thursday afternoon waiting to see various ear specialists at the Johns Hopkins Outpatient building in Baltimore. Doctors’ offices, like airports and train stations, provide ample reading time. I finished It’s All Relative on New Year’s Eve.

This New Year’s Resolution was inspired by the list I kept in the academic year 1969-1970. That was the year I attended Princess Helena College in Hertfordshire, England, as an Isabelle Carden Griffin Exchange Student of the English-Speaking Union. I don’t know what possessed me to start recording the titles. I do remember that I read a number of books—like William Thackeray’s Vanity Fair and Women in Love by D.H. Lawrence—because I thought I ought to. (I am glad I read Women in Love both because I enjoyed it and because several classmates and I went to the cinema later that year to see Ken Russell’s film adaptation. That was when I fell in love with both Alan Bates and Oliver Reed. But I digress.) The list may well survive somewhere in some box. Pretty sure the final tally was around seventy-five books.

My Dear One chose this book because I am genealogist for both my father’s and mother’s families. As a hefty number of my ancestors made it to these shores by the middle of the 17th century, I end up discovering comparatively famous relatives even without the benefit of algorithms on Geni or WikiTree. Genealogy had been a passive kind of interest until I acquired Family Tree Maker software. I probably would have been better off with something less addictive, say a taste for crack cocaine.

Taking a break from the study of my own Anglo-Saxon lineage, I moved on to the few twigs and leaves that constituted my Dear One’s family shrub. That clan is pure Lithuanian and poses an entirely different kind of challenge. There are ship manifests and missing ship manifests, multiple spellings of names and inexplicable spellings, not very useful family traditions and problems arising from illiteracy. Documents appeared in English, Latin (bless the excellent record-keeping of the Catholic Church), Lithuanian, German and Russian. We’ve had a run of good luck with his maternal line at the State Archives in Vilnius and with a distant cousin we met at dinner in Balbieriškis. Marytė had been debriefing her mother who, at age ninety-something, possessed both an incredible amount of information and a fully intact mind.  A private researcher, Vilius Vasseikis, turned up an amazing record of his father’s mother’s family. That shrub has thrived. (For more information on our travels to Lithuania and our family there search “Lithuania” in this blog.)

So yes. They have all become My People.

Jacobs makes a business writing about his life as well as writing about the lives of politicians, actors and various celebrities. When an email lured him into the quicksand of genealogical research, he jumped in and sank up to his ears. He gets the idea of organizing a “Global Family Reunion,” one that will be well attended enough to make the Guinness Book of World Records. In initiating this project he explores his immediate family, his more remote Neanderthal cousins, the nature of families, the privacy of the dead and a host of issues that arise when one blunders into the sticky web of ancestry.

Brief notes at the end of most chapters provide a sort of count-down to the event and a record of his declining emotional and cognitive well-being.

Jacobs’ key point, however, is that genealogy (like pretty much all human activity) can be a force for inclusion or exclusion. (His wife Julie, or maybe his aunt Marti, critiques for instance his use of the word “Balkanization” as it implies that the people living there are inherently isolationist and violent.) While in past centuries finding one’s roots was a means of establishing power and celebrity, today, particularly with the ready availability of DNA testing, exploring one’s branches can be a way to find acceptance at least for all those “others.” To this end he also reviews recent research and recounts some rather harsh arguments with family members.

A handy appendix, “A Brief and Subjective Guide to Getting Started on Your Family Tree” is full of good advice, handy references and cautionary words.