Book #5 in 2018: A Brief History of Everyone Who Ever Lived by Adam Rutherford

My sister used to drive me crazy—well she still does in many ways—for her interactions with her daughters. One of the worst things was her flat assertion about her younger daughter’s problems with math. “She can’t do math,” Sister said. “She get’s it from me.”

Then a few years ago we were at lunch with friends in town so their college-ready daughter could visit Maryland Institute College of Art where I happen to be an adjunct professor of art history. I was chatting with the mom about the applications process for the Aspiring Artist. After carrying on about the young woman’s artistic gifts, Mom went off on a tangent about how the talents were important given other deficiencies.

Both women are in some sense right. Their offspring did acquire problems with math from their parents. The parents handed down their own phobias, bad experiences and insecurities lock, stock and barrel. They predisposed their daughters to failure. Sister’s older daughter, who happens to be adopted, was allowed ironically the same excuse of genetic innumeracy.

I don’t know how many times I said to them and to others, “There is no such thing as a ‘math gene.’ The only thing the children are getting from you is a bad attitude about math and an unwarranted excuse for failure.” 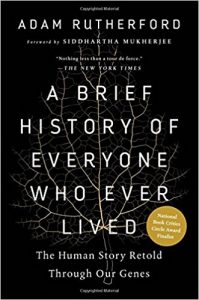 Everyone Who Ever Lived

Now I have a whole book, Adam Rutherford’s A Brief History of Everyone Who Ever Lived: The Human Story Retold Through Our Genes (The Experiment LLC, 2017).

A birthday gift from my Dear One, it makes a wonderful pair with It’s All Relative by A.J. Jacobs, Christmas present and the first book I finished in 2018. Both explore preconceptions and misconceptions and mythologies about ancestry. Rutherford brings the weight of the most recent discoveries (he cites work published as recently as 2017) to his discussion of the genome and of human evolution. His stories are riveting and his literary style an absolute hoot. His vocabulary is vast, descriptive and always exactly right. Then there was the footnote on page 333 that marks his use of “ackamarackus” as in “The legion purveyors of ackamarackus love a real but tricky scientific concept that they can bolt their quackery onto.” Here is the footnote: “My editor insisted that there was not room for two flapdoodles in one book, so here is an equivalent word for tosh, baboonery, claptrap, flimflam, rannygazoo, baloney, or just plain old nonsense.”

How can one not love a writer and his editor who enjoy this kind of exchange? For the record, “ackamarackus” is listed in the Oxford English Dictionary. I checked. 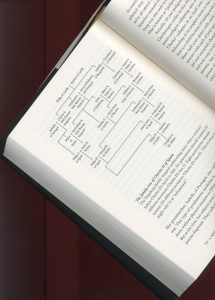 Rutherford looks at the history of every one of us naked apes who ever lived in two parts: “How We Came to Be” and “Who We Are Now.” He tells the fascinating tale of homo sapiens, with excursions in the families of our cousins, including Neanderthals, Denisovans and others. He explores the settling of Europe and the arrival of humans in the western hemisphere and concludes with a knee-slapper about royalty, companies that test your spit to give you a picture of your DNA, and ancestral complexities. After demonstrating that we can all claim descent from Charlemagne, the late 8th century founder of the Holy Roman Empire, he reviews the improbable discovery of the skeletal remains of King Richard III, last of the Plantagenets, who died on Bosworth Field and whose post-mortem reputation for evil was drafted by William Shakespeare. There’s also a sidebar looking into the identity of Jack the Ripper but my favorite is the discussion of the House of Hapsburg and its last monarch, the congenitally damaged Charles II of Spain.

I mention the convolutions of the Hapsburg family thicket when I teach art of the 16th and 17th centuries, the paintings of Titian and Velázquez and the abrupt shift to the Bourbóns who take the Spanish throne in the early 19th century. A standard discussion involves comparing family portraits by Velázquez (Las Meninas, 1656) and Goya (Charles IV and his Family, 1801). I also show a sequence of portraits starting with Philip of Castile and others in his generation, moving down through the Spanish monarchs and noting the increasing facial deformities around the prognathous jaw. Rutherford’s discussion of the genetics is way more interesting that my art historical presentation.

The second half of the book introduces Darwin and explains why there is no genetic concept of “race.” Rutherford presents the ironic fact that Charles Darwin, who gave us evolution, was the cousin of Francis Galton who gave us eugenics and a sordid legacy of racism that served Hitler and the Nazis as well as white supremacist groups shaping politics in the United States and Europe.

The book is wonderfully designed and includes a helpful glossary of terms, an excellent index and suggested readings keyed to the chapters. Don’t skip any of the footnotes. I already mentioned one, but they are both helpful and hilarious—often more like asides that Rutherford might offer up over a pint in the pub.