May I have a moment to whinge before I applaud? This book is about good writing and the writer demonstrates two bad habits that happen to drive me mad. Blatt splits infinitives and he seems not to grasp the difference between “fewer” and “less.”

Now I know that it is fine to boldly go wherever one damn well wants, but a split infinitive sounds awkward to my ear. It also runs afoul of the injunction Blatt explores in Chapter 1 to use adverbs of the -ly persuasion “sparingly.” In the final sentence of that chapter he writes,

“But when trying to write standout prose, it can’t hurt to deliberately avoid the troublesome part of speech.” A split infinitive requires a verb, a word which modifies the verb so cleaved.

When he removed “deliberately” in the process of editing the sentence he eliminated redundancy, increased the clarity of the sentence, observed the injunction against excessive use of -ly words and returned the infinitive to harmonious wholeness. (I am not ignoring the conjunction “but” that begins the sentence. That’s for a different plaint.)

The word “fewer” refers to things in the plural, items which can be counted. “Least” is a measurement of magnitude. Blatt writes on page 21, “The books farthest to the left [of the Goodreads scale] have the most ratings while the books to the right have the least.” Gack! “Fewest ratings,” please.

Clearly Blatt could use the editorial attentions he mentions several times. 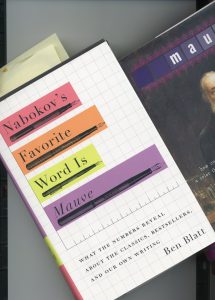 Nabokov’s Favorite Word is Mauve: What the numbers reveal about the classics, bestsellers, and our own writing (Simon & Schuster, 2017) by Ben Blatt is, nonetheless, a happy addition to my grammar, usage and style shelf. Blatt collects the standard advice given to students of the craft and looks for evidence in big data that the advice is good—and that successful writers who thus opine follow their own rules. The focus is on fiction; “success” is defined in several ways: inclusion in the canon of classics; recognition through important literary awards; and ascension to the top of The New York Times’ Best Seller list. A successful author may or may not be a household name; she may or may not have earned wealth from her endeavors; he may or may not be the darling of literary critics.

I also like the book because it has a wonderful title. Reminds me of Simon Garfield’s Mauve: How One Man Invented a Color That Changed the World (2001). I must remember to go back and see if there is any mention in Garfield’s multifaceted exploration of the unexpected consequences of the unanticipated byproduct of a chemical reaction.

Not all of the text focuses on stylistic proscriptions. The book opens with the historic effort to separate the authorial voices of Alexander Hamilton and James Madison in The Federalist Papers and includes questions about whether men and women use language differently. There is the question of whether British or American writers write more loudly and the implications of the amount of space devoted to the author’s name on a book jacket. Opening sentences and closing cliffhangers get a chapter. Blatt’s review of readability formulae took me back to my work as a freelance writer for education publishers and my experiences with their algorithms. Blatt mentions the Flesch-Kincaid Grade Level test and the Dale-Chall Score. I had more than a few go-rounds with the Fry Reading Graph, too.

The book is filled with lists and charts, most of them involving, appropriately, shades of purple. I like graphics—I like relationships articulated pictorially. Lists offer one a sense of who is at the top and who is at the bottom of any given standard. Shapes and colors, however, offer a more nuanced judgment and insist on context.

Nabokov’s Favorite Word Is Mauve may or may not hold the clues to good writing but it suggests a lot about the writing we perceive as “good” and the writers we designate “successes.”