It’s been a big year for the sculptor Auguste Rodin (1840-1917) in museums. Sadly, I missed Séraphin Soudbinine: From Rodin’s Assistant to Ceramic Artist and Klimt & Rodin: An Artistic Encounter, both of which were at the Legion of Honor in San Francisco. Kiefer – Rodin closes at the Barnes Foundation in Philadelphia in a few weeks. 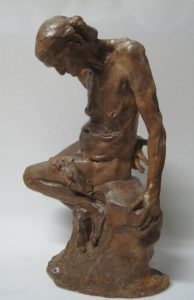 When I noticed You Must Change Your Life: The Story of Rainer Maria Rilke and Auguste Rodin (W. W. Norton & Company, 2016) by Rachel Corbett, which won the Marburg Prize, I thought, “Hmmmm, that looks interesting.” Rodin’s art is prominent in my modern art course.; I have visited the Rodin Museum in Paris at least four times since I was eighteen, when I developed a crush on his small figure, Celle qui fut la belle Heaulmière (She who was the beautiful helmet-maker’s wife).  I think that was about the same time I read a reference to that sculpture in Robert Heinlein’s Stranger in a Strange Land. I knew less about Rilke (1875-1926), only that his poems inspired by the art of post-impressionist painter Paul Cézanne (1839-1906) offer marvelous insight and that he was a key influence on the painter Balthus (1908-2001) whose work I find distasteful.

I filled the book with notes. I loved it. 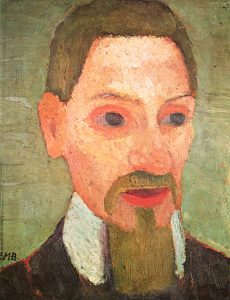 You Must Change Your Life  offers intertwined biographies and lays out the related choreographies danced together and apart.

Rodin was originally the mentor, the giant of modern art in Paris at the turn of the 19th century into the 20th. Corbett limns a wonderful tale about him, not so much of the genius who challenged artistic dogma but of the maker, the artisan driven by carnal appetites who invented his own genius. Rilke was the neurasthenic child of the waning years of the Austro-Hungarian empire. His identity was shaped by a mother thwarted in her own social ambitions and his poetry had to unknot itself from the sticky bonds of Romantic lyricism.

Both men took full advantage of loosened sexual mores at the fin-de-siècle. Some of the relationships were lengthy and profound; few of their partners seemed to reap comparable benefits.

Rodin’s sexual voraciousness is legendary and disturbing, and included troubled affairs with the sculptor Camille Claudel and the English painter Gwen John. He married his long-time, long-suffering mistress Rose Beuret only months before they both died; their union lasted fifty years during which Beuret had witnessed countless couplings, some which may have hurt her deeply.  Rilke’s affairs were numerous, starting with his infatuation with the pioneering psychotherapist Lou Andreas-Salomé and continuing with various aristocratic women. He married the sculptor Clara Westhoff (1878-1954); she, in fact, provided the introduction to Rodin with whom she had studied. They lived most of their lives apart.

Rodin’s son, Auguste, existed in French law only as Beuret’s son. Rodin alternately ignored and abused his son; when the sculptor died, his son inherited nothing of the massive and invaluable estate that went to the French government as the Musée Rodin. Rilke had a daughter with Westhoff, Ruth. The child was passed around from mother to grandparents. When Ruth married, Rilke did not find it convenient to attend her wedding.

The book feels timely in this #MeToo moment. Rodin was a sexual predator of the first order—although to be fair he was also the target of ambitious females. Rilke’s involvements were more emotionally twisted. Corbett, who wrote this book before any of the scandals of the past year broke, does a fine job telling truths that don’t cloud her deep appreciation of the artists’ accomplishments and her empathy for them as human beings. 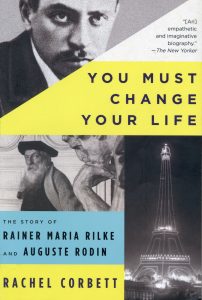 You Must Change Your Life

This story is not so much a narrative that connects two discrete threads; it is more a structure of clusters, of interlocking rings. There is the artist’s colony at Worpswede in northern Germany where Westhoff and the painter Paula Becker became friends, where Rilke comes to be with Westhoff, having met her in Paris. Worpswede becomes a minor character of its own as part of the story of turn-of-the-century modernism. There is Munich and the ideas of philosophers like Theodor Lipps and Wilhelm Worringer that evolved into the concept of “empathy.” There is even the serendipitous discovery of the Hôtel Biron in Paris, an ancient but glorious heap the French government wanted to sell but which became housing for the painter Henri Matisse, Westhoff, the dancer Isadora Duncan, the future Surrealist Jean Cocteau, and others—and, of course, Rodin and Rilke. The Hôtel Biron is today better known as the Musée Rodin.

You Must Change Your Life does what a great biography or memoir always does for me: it provides context, it makes sense of the facts of art history, the objects and movements and breakthroughs. The book is a wonderful look at the highways, byways and crossroads of those thirty crucial years between the waning of Impressionism and the emergence of Surrealism—while getting mired in none of art history’s arbitrary and artificial compartmentalization.