I do like Gideon Crew–quite a bit more than Preston & Child’s better-known sleuth, Agent Pendergast, whom I find annoying in the southern, courtly, albino-pale, omniscient and omnipotent way. “The Pharaoh Key” (#5 in the Gideon Crew series) was a giggle and a treat I inhaled like melting ice cream on a hot summer’s day. Tried to make it a bedside book but then realized yesterday I just wanted to know what happened. Gideon Crew is a hero because he must be, but his past is chock-a-block with illicit activities and the motivations that drive him are often dubious. He’s a Renaissance kind of guy–smart, good-looking, appealing to the ladies, passionate about jazz music, skilled at legerdemain and a wonderful cook. And a dedicated fisherman. When bad things happen–and of course Preston and Child make sure lots of truly terrible things happen–Gideon brings at least some of it down on himself. When’s he’s stupid, and every now and then he is utterly obtuse, he’s very, very stupid, and the results can be catastrophic. 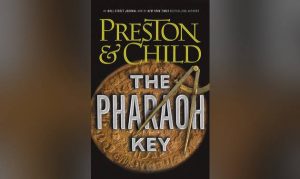 The treat here is the romp through Middle Kingdom Egyptology–about which Preston knows a fair amount having written on Egyptian tombs for The New Yorker magazine (“All the King’s Sons,” January 22, 1996). His partner-in-mystery, Lincoln Child had been agitating for some way of using that material in a thriller and quite suddenly a story came together. Preston has written a number of books and articles on non-fiction subjects; his brother Richard Preston is an accomplished writer as well. They say the most effective lie is the one that is to the greatest extent possible the truth and Preston’s wide erudition and immense trove of trivia enriches his fiction immeasurably.It’s a new book, released only on June 12 and so no spoilers here. The narrative owes a debt to the traditions of lost worlds, legendary treasures and Old Testament scripture. Camels figure prominently. The adventure starts with high-tech gadgets and analysis but ends up with complete reliance on physical strength, animal cunning, a lot of helpful if anachronistic knowledge (given the context) and immeasurable courage and loyalty. There’s a love interest too, of course. When is there not?