Book #6 in 2018: “City of Endless Night” by Douglas Preston and Lincoln Child

No genetically engineered monsters, no exotic locations, no time-travel: #17 of the Pendergast series, The City of Endless Night by Douglas Preston and Lincoln Child (Grand Central Publishing, 2018),  is a good, old-fashioned thriller. 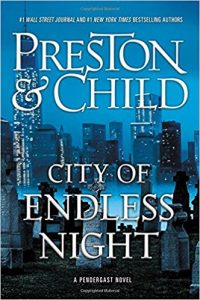 Truth be told, Doug Preston is my cousin. I adore him and I think he is a wonderful writer in any genre. I would read these books only because he wrote them—just as I read everything his brother Richard Preston writes, just as I have bought every album or CD any musician friend ever put out. This chapter in the Agent A.X.L. Pendergast saga, though, is a good one.

I’m not that crazy about Aloysius Pendergast. He’s a little too gifted, a little too magical, a little too educated, a little too smart, a little too sexy and way, way, way too wealthy. I like my heroes more flawed. As a girl, the hapless Judy Bolton, in my opinion, had it all over the flawless Nancy Drew. I’ve told Doug so; it’s no secret. Just as I am more of a Dr. Watson kind of person than a fan of Sherlock Holmes, I find Lieutenant Vincent d’Agosta more appealing. I do admire, however, the way that relationship has been crafted, the synergy the characters create, the fact that each elevates and humanizes the other.

The action returns to New York City and the most remote locale is an abandoned mental institution on Long Island. The story revolves around a series of murders and the decapitation of the victims, as well as the disappearance of their heads. Both the New York Police Department and the FBI stake out territory and the usual conflict between those agencies is minimized. While there is, of course, an antagonist, a force of pure evil, there are also other malign agencies, not the least of which is digital technology.

Beloved regulars—Proctor, Pendergast’s chauffeur and all-purpose ninja; Captain Laura Hayward, cop extraordinaire and Vincent’s cherished wife; Constance, Pendergast’s eerie “ward” born in the nineteenth century—and irregulars one may or may not embrace—Bryce Harriman, the journalist; Howard Longstreet, Pendergast’s FBI superior and friend—enrich the action. Their presence, however, is limited and it is the relationship between Pendergast and d’Agosta that drives the story.

The book is short. It’s an easy read and good fun and there are a couple of twists I did not anticipate, so no spoilers here.

Years ago, Doug gave me to understand that he and Lincoln were about done with Pendergast. Then their publisher made them the kind of offer no responsible husband-and-father refuses. I think there are a great many more stories about A.X.L. Pendergast to tell and this sweet, tight, compact narrative feels like a hinge. I think a door is about to open into or onto something new and with luck entirely unexpected.