What I learned in on my trip to Washington DC 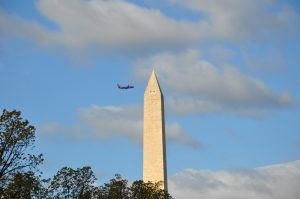 Southwest Air and the Washington Monument

I have learned that I need to open up my Surface Pro tablet, my travel device, several days ahead of time and make sure everything is working.

Specifically, I must check that Microsoft OneDrive is working properly. Once home, I booted the thing up and tried again. Office 365 was still not functioning. I called GoDaddy, as I lease Office as part of my website; they put me on twenty minutes hold and it has been over two hours since I did that. Then the tablet wanted to update so I said, “Fine go ahead, update. That took quite a while. Out of curiosity, I tried again. Now everything works. Yup. Check to make sure everything is working at least three or four days before it will matter. 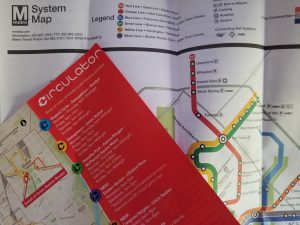 That senior Metrorail card offered by WMATA is a wonderful thing and using it cuts the cost of public transportation in half. Yes, it was a pain figuring out where TRiPs (the Transit Services store) was located in that mess of structures in Silver Spring and in the pouring rain. The card, though, pays off its two-dollar cost almost immediately and it works on everything, even the Circulator.

Yeah, about the Circulator. I had some vague memory of a jitney that supposedly circled the Mall. There is indeed such a thing and it travels in a figure-eight pattern, at about ten-minute intervals, that provides a glimpse of several major monuments and a lovely view across the Tidal Basin. It starts at Union Station and fifteen stops later returns. It costs a dollar a head unless you have a senior Metrorail card, in which case it costs fifty cents. Or unless the scanner isn’t working, as it wasn’t today, in which case it costs nothing. We emerged from the National Gallery of Art (stop number 2) intending to walk to the Vietnam Veterans Memorial and the Lincoln Memorial from the Washington Monument stop (stop number 5) but the cold blasting wind the weather service had foretold was whipping the flags at half-staff for the late Rep. Elijah Cummings (D-MD)and we were just too tired to cope. But what a tour we got for free on the way to the Metro Smithsonian station (stop number 13).

Even better, there are five other Circulator routes, three of which terminate at Union Station. Seriously, what could be better. 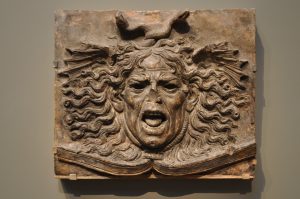 The National Museum of Natural History is a headache to navigate. All kinds of new displays but figuring out how to engage with them in some logical way was clearly not something curators thought about. Or they did and decided that their curatorial logic is so self-evident, how could any schlub off the street not get it immediately? The National Gallery of Art remains an old friend. Good lunch in the cafeteria. Wonderful exhibitions of the work of Andrea Verrocchio and Alonso Berruguete. As we circled around out of Verrocchio back to the main hallway, I saw John Singleton Copley’s “Watson and the Shark” (1778) a couple galleries away. Grabbed a pic and texted it to my Tattooed Boy. It’s his favorite. By the way, never forget that the NGA and all twenty of the Smithsonian Museums and the National Zoo are free. All the time.

Location is everything, no less in a hotel than a home. The Wyndham-Days Inn at 4400 Connecticut Avenue NW is in an excellent location, on the bus lines and Metro, and at the center of a cluster of cafés, restaurants, liquor stores and a posh little grocery. There is even a Burger King next door. It’s also so much cheaper and less Republican than the Trump International Hotel on Pennsylvania Avenue.

When location is substantially better than the building, however, one does have issues. The wi-fi is so inadequate that I am a little surprised that they claim it even exists. The building itself has seen better days—lots and lots and lots and lots of better days. At one point my Dear One cautioned me not to put my new and freshly autographed book and my handbag on the floor—a silverfish had just crawled out of his book and run down his sleeve. The toilet paper roll hanger was at least the third one in that general location, and plastic hangers housing earlier screws were still in evidence. Still, the cost of parking the car was only twenty-five dollars a night and there were three extremely convenient handicap spaces. 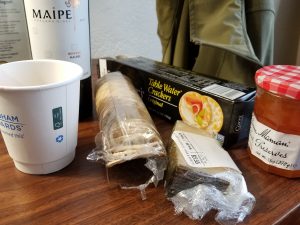 Did I mention the proximity of several excellent eateries? Sfoglina was almost across the street and It was so worth the splurge. The polenta with mushrooms, the cucumber salad, so good. And the mozzarella with tomatoes and roasted beets. Oh be still my beating heart and contain yourselves my salivary glands. And what really excellent coffee. No room for dessert, but the coffee sent me straight back to Rome. Or Florence. Or Venice or Milan. Some place where coffee is a thing unto itself.

However, if all you need is a snack and a drink, the water biscuit, peach jam and Iberico cheese I threw in the cart along with a bottle of what Rumpole of the Bailey referred to as “Chateau Thames Embankment” and vodka-tonic for my Dear One does very well.

The neighborhood boasts both the University of the District of Columbia campus and a public library branch. The Cleveland Park Library, where Ruta Sepetys read from her new book “The Fountains of Silence,” is according to Google Maps a seven-minute drive away. Joint effort of the District public library system and Politics and Prose bookshop. So we left at about six-fifteen to have plenty of time to get to a seven o’clock event, lest parking be an issue. 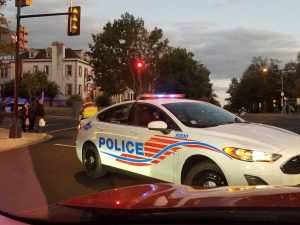 one of DCs finest

Parking wasn’t an issue. The District, though, gets hypervigilant when someone reports “a package.” Now that I can consult the map, it looks like we were at the intersection of Connecticut and Veazey Terrace when we were barricaded by an enclosure of flashing reds and blues. No going forward or back, left or right. Then motorcycles started rolling in. Then more police cars and vans, and a couple of ambulances. I stopped counting vehicles around two dozen. In a blink it had begun and now in a blink it was over. We walked into the library at five minutes to seven.

A number of main drags into Washington change lane patterns at rush hour. Whichever direction carries the most traffic gets the extra lane or two. I knew this about Independence, for instance, having once been towed because I didn’t read the fine print on the street sign. Same is true of Connecticut Avenue which runs straight to Silver Spring and Bethesda. I turned left onto Connecticut at about nine (apparently nine-thirty marks the close of morning rush hour I didn’t know) and stopped at the first light—where I realized there was oncoming traffic facing me. By the time the light went green I had figured out my error. To the music of angry toots and honks I merged into the northbound cars and breathed a sigh of relief.

A lot of lessons packed into fewer than forty-eight hours.